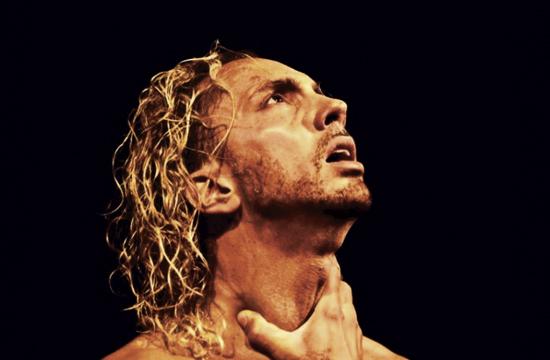 Sisyphus, a character from Greek mythology, angered the gods by cheating death. When he was caught, he was condemned to push a stone up a hill, only for it to roll back down and have him restart the process all over again. Imagine seeing that situation on stage. Imagine the screams of agony. Now, imagine that all of it and the events leading up to it is silent. That is exactly what one would see when they go to see the production of “Sisyphus” opening this Tuesday at Theatre 40 (241 S Moreno Dr., Beverly Hills).

This particular production of Sisyphus is the U.S. premiere of director Elpida Skouphalou and actor Ioannis “Icarus” Melissanidis, and much like the real Icarus, it is sure to be a blaze of glory for all parties involved.

Melissanidis, while the actual star of the show, is also a star in his own right, having earned a gold medal in artistic gymnastics, modeled for Armani, lit the torch at the 2004 Athens Olympics, the 2014 Sochi Winter Olympics, and will be serving as an ambassador to the Special Olympics this Saturday right here in L.A.

Melissanidis was born in Germany, moving to Macedonia, Greece as a young child.

A gypsy “by choice,” his voice contains an amalgamation of British, German, and Greek accents. He traveled a lot due to gymnastics training camps and competitions, as well as for theater.

Melissanidis takes great pride in his work, even merging the two worlds by dedicating his upcoming performance of “Sisyphus” to the special Olympians of the U.S. and Greece this Tuesday.

“I feel that ‘Sisyphus’ has a pertinent message to deliver,” Melissanidis said. “It deals with the Shakespearean dilemma of ‘to be’ part of the game or ‘not to be’ when confronting your destiny, and I feel that theme can be applied to the Olympics as well.”

As mentioned before, the production of Sisyphus is mimed, with no dialogue, forcing the audience to really see and feel Sisyphus’ pain as he is punished for his actions, much like Prometheus was. This connects to Melissanidis’ role as a torch-bearer in past Olympic games.

“The flame connects back to Prometheus,” he said. “It represents knowledge, and coming from Greece, the birthplace of not only philosophy and theater, but also the Olympics, it’s an extra honorary weight when you’re carrying it.”

Melissanidis has acted in many dramatic plays, but this is his first one without speech.

“I’ve acted in ‘Romeo & Juliet,’ ‘Hamlet,’ really powerful plays, but ‘Sisyphus’ was quite a challenge, because you’re trying to convey all this emotion without saying a word,” he said. “You have to exaggerate your pain and happiness so people can understand you, but you still have to tell an organic story as the actor.”

His favorite role over his career up until now has been King Hamlet. He didn’t like the role of Sisyphus at first, but grew to love it over time, “I didn’t understand the nuances of the character at first, but over time, especially with no speech, you learn to understand him in a deeper way than you ever could with normal acting.”

The Special Olympics are to take place here in Los Angeles from July 25-Aug. 2, with Melissanidis acting as an ambassador, as mentioned before.

When asked about the subject, Melissanidis replied, “The opening ceremonies require online tickets, but the other events are free. Therefore, there is no excuse for you ‘Los Angelenos’ to not attend, to embrace and compliment those athletes. I will be there, and I hope your great city will be able to attend. It’s great to help out, or to even just go there and support them, with a smile or a hug. You will be better as a human being.”

If you would like more information regarding the Special Olympics, or Melissanidis’ performance as Sisyphus, you can visit specialolympics.org or theatre40.org, respectively.

By mirrormmg July 24, 2015
in Life and Arts
Related Posts