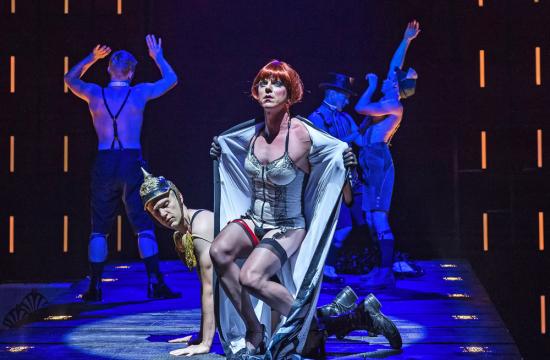 The slaughter of six million Jews under Hitler’s extermination plan is well documented and that, in and of itself, is the terrifying face of the Holocaust. It is an historic fact that the Third Reich also rounded up gypsies, the mentally retarded or handicapped, and intellectuals. What is perhaps a lesser known is that gays, referred to as “bents” or “fluffs,” also fell victim to not fitting into Hitler’s manifesto of a pure Aryan race. Martin Sherman’s powerfully written play, “Bent,” shines a light on that more obscure piece of history, illuminating the treatment of homosexuals under the Nazi regime.

This riveting play, set in the 1930s, was first performed in London in 1979 starring Ian McKellen, followed by its Broadway debut in 1980 starring Richard Gere and David Dukes. Subsequently, the award-winning play has been performed all over the world. This latest revival, exquisitely directed by Moisés Kaufman, is a welcome addition to the Taper’s family of excellent productions.

On rise, Max, powerfully played by Patrick Heusinger, limps on stage wearing a bathrobe. Following a night of drug-filled debauchery with a leather-clad biker named Wolf, Max is in pain from head to toe. He has no memory of the night before and is not exactly sure how he got bruises all over his body. He turns his back to the audience to signify urinating, which we hear, but don’t see. For some reason, the stopping and starting of the “stream” gets a laugh.

Max’s devoted lover Rudy, beautifully played by Andy Mientus, appears and gets busy watering plants, making coffee, scrambling eggs, and so on. A dancer at a local night club, he is quite deliberate in his movements making sure he makes as much noise as possible to signal his disapproval of Max’s behavior. In a very comedic way, the playwright allows the events of last evening to unfold, with Max’s awareness slowly creeping through the thick veil of a humongous hangover.

By and by, a stark naked Wolf, fearlessly played by Tom Berklund, walks on stage and positions himself in such a way that Max is staring straight up at his rather heavily endowed genitals. In Max’s drunken stupor, he told him he was a very rich baron and owned a car and a country house to which Wolf received an invitation. The truth is Max and Rudy can’t even pay the rent and are on the verge of being dispossessed from their modest Berlin apartment. The action is light-hearted and the audience is lulled into a false sense of amusement, not knowing that a shocking one-two punch looms just seconds away. And then it happens. With an abrupt transition, Nazi storm troopers burst into the apartment and slit Wolf’s throat, for plunging its characters into the world of Nazi horror.

Max and Rudy know they must get out of Berlin and temporarily go into hiding in the woods. Sweet, lovable Rudy goes foraging for food and returns with cheese and an apple that don’t meet Max’s delicate palate developed growing up in a wealthy family who own a button factory. He left the family ten years ago to pursue his homosexual lifestyle. In a desperate attempt to escape, Max asks his Uncle Freddie, played well by Ray Baker, to get him two tickets to Amsterdam. But Freddie, who is discreet with his homosexual encounters, can only secure one ticket, which despite his ability to feel deep emotion, he refuses because of his wish to protect Rudy.

Eventually, Max and Rudy get caught. Thus begins the unspeakable acts of brutality, starting with the train ride to the Dachau concentration camp. Rudy is dragged off; we hear his piercing screams.

He is brought back semi-conscious and bloodied. Another prisoner named Horst, hauntingly played by Charlie Hofheimer, cautions Max not to react to the beating, warning if he does, he will be immediately shot.

The Nazi officer asks Max if he knows Rudy. He says no. He is asked that question over and over. Each time Max says: “I do not know him.”

As a test, the officer hands him a club and tells him to beat Rudy.

With his own survival at stake, Max executes the command with dire results. In another instance, he has to prove his is not a “fluff” by having sex with a dead 15-year-old girl. It should be noted that the

gays wore pink triangles while the Jews wore the familiar yellow ones, with gays ranked even lower than Jews. Knowing this, Max passes himself off as a Jew and gets to wear the yellow triangle.

Act II, a trifle too long, takes place primarily in a yard at Dachau.

Max’s job is to move a pile of rocks from one side of the yard to the other. When that’s completed, to move the same pile of rocks back to the original side. This must be repeated over and over. The exercise is designed to drive a person insane. In order to preserve his sanity, he bribes a guard to let Horst help him. At first Horst is not happy about his new assignment, but realizes it’s better than most other “jobs.” At one point, Max mentions that they are going to miss the Olympics to which Horst replies, “I knew there was a reason I didn’t want to be here.” In a tribute to Sherman’s writing, he does offer occasional comic relief as otherwise it would be an unbearably painful theatrical experience, which it is not.

As Horst and Max build their relationship, without directly looking at, or talking to, each other, Max begins to develop real feelings.

Almost like peeling away layers of an onion, Heusinger’s Max slowly reveals a love and humanity that had been missing from his life. In an effort to have some semblance of human contact, in a moving, tenderly directed scene, Max and Horst, without touching or looking at each other, make love through their imaginations, using explicit verbal images of their bodies. This sexual fantasy reminds them of their humanity and deepens Max’s ability to feel real emotions. In a mesmerizing act of defiance, Max finally openly owns his sexuality and takes an action that will leave you speechless.

Other members of this cast, all of whom give outstanding performances, include Hugo Armstrong, Ray Baker, Matthew Carlson, Brionne Davis, Wyatt Fenner, Brian Slaten, and Jonathan B. Wright. Jake Shears as Greta does an dazzling musical number after which we watch him in a fascinating transition from a female impersonator to a handsome “straight” man who is married with a couple of kids.

As with all Center Theatre Group productions, the technical team was excellent including: Scenic and Costume Design by Beowulf Boritt, Lighting Design by Justin Townsend, and Sound Design by Cricket S. Myers.

By mirrormmg August 1, 2015
in Life and Arts
Related Posts