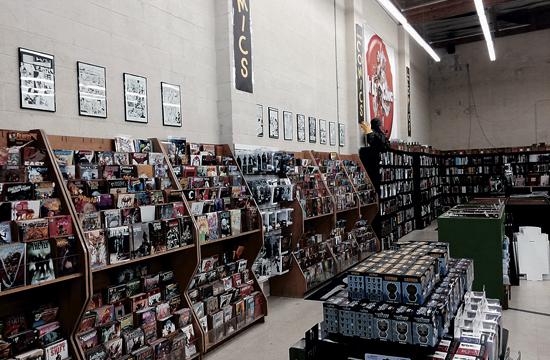 The oldest comic book store in Los Angeles County has added something new.

Hi De Ho Comics in Santa Monica not only offers the latest superhero stuff, but recently the store has added a Comics Night – as in comedians. On the first Thursday of every month, comedians have been performing their stand-up materiel inside the local comic book store.

“That was my baby,” said Moris Machuca, one of the owners of Hi De Ho Comics. “I’m a huge comedy nerd. I love the different comedy shows around Los Angeles. L.A. is a huge place for comedy talent.”

Machuca and his staff have been able to book some strong acts at Hi De Ho, including rising comedy star Jeff Dye among others. Comedians perform on a stage in front of a small audience seated in chairs around the comic book store.

The next comedy night is set for Thursday, Sept. 3. The event is free but donations are suggested.

While the comedy night is something that has recently been added, Hi De Ho Comics continues to sell all the latest new comic books, back issues from the Silver Age, graphic novels, superhero statues, and so much more.

Machuca is part of new ownership that took over the comic book store last November. They’ve tried to clean things up and make the store look more modern and up-to-date.

“We’ve completely redone the store in a short amount of time,” Machuca said. “We have put in a new bookshelf and opened up one/fourth of the floor space previously closed to the public. We’ve made the layout a lot more open. Our biggest concern is having a nice open space people can walk in.”

The look of the store has no doubt improved, and Machuca said the “Yelp” rating has gone up in most cases from three stars to five. Something that is important to the owners is creating a comfortable setting for all comic book customers.

“We want to make sure everyone feels like they are welcomed,” Machuca said. “We’re all about sharing excitement with our customers. The big thing is cultivating the enthusiasm. It’s like, ‘You like comics? Awesome! That’s the one thing we can agree on. Let’s make that experience the best one possible.”

There’s been a lot of buzz lately created by the upcoming new “Star Wars” film.

“The runaway hit recently have been the Star Wars comics,” Machuca pointed out. “Star Wars #1 was the best selling comic book I think in the past 20 years. Every shop sold out of #1.”

Other top sellers include the ever-popular Batman comics and its new creative team, and Marvel’s new “Secret Wars.”

Independent titles have also become more popular in the past few years.

“A lot of our best-selling titles are independent books,” Machuca noted, pointing to the “Saga” series by Image Comics as a good example.

Another shift in the comic book scene has seen an increased presence with female fans.

“That’s something we try to very actively cultivate,” Machuca said. “Women are such a big segment of the market. If you make the store comfortable for women you’re going to be a success.”

The stronger female presence has also been felt at the creative level.

By mirrormmg August 25, 2015
in Life and Arts
Related Posts