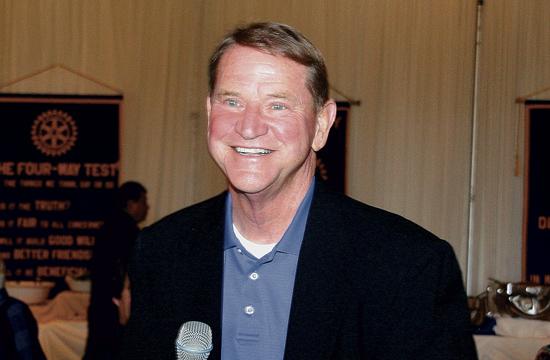 Dr. J. Zink’s mission Aug. 28 was to improve the quality of love among Santa Monica Rotarians by distilling 42 years as a marriage therapist into a 35-minute talk.

“The greatest gift I can offer you is to answer – what is it that makes a soul mate?” Zink asked.

Retired as a therapist and public speaker, Zink explained that he lost his wife 22 years ago, his childhood sweetheart and soul mate. Years later, he eventually married his late best friend’s wife. They grew together once both of their spouses died. They helped each other and developed feelings for each other. Today, he can confidently say he found another soul mate.

Zink theorized the success of his new marriage, along with everyone else’s relationships, stems from an underlying, simple idea.

Harley’s approach to an affair-proof marriage began with identifying each other’s most important emotional needs and developing habits to meet them.

Starting with the men and making Freud proud, the first need was – and you probably guessed it – sex. The second one was recreational companionship. The third need was a good-looking person (with both clothes on and off). The fourth was domesticity.

And lastly, “number five, after we have you taking care of the house, worry about your weight, making sure that you can be comfortable in a tent with mosquitos, and providing as much sex as we can possibly use, we ask you to admire us for it.”

The fifth most important emotional need was respect, praise, and esteem for himself.

“It all turns out to not be a so beautiful picture,” Zink said, “because none of the five women’s needs that I’m about to share with you match any of the needs of the men. And this was my first insight as a marriage therapist: I figured out that the reason those two wanted to kill each other is because he was projecting his needs onto her and she was projecting her needs onto him.”

Putting the men’s needs on hold, Zink moved on to what 1,100 women reported as their top five emotional needs.

The number one need for women was affection – it’s flirting, touching, the little things. Number two for her partner to listen to her without trying to fix the problems and without distraction. The third was honesty, and the fourth was the choice to work or stay home. The last need was for him to help with the children.

“Women are clearly not the same species as men, and furthermore, women are by the design the superior species,” Zink said to laughter in the room.

Though Zink relied on normative gender conventions and a heterosexual sample, there was a communal sense in the room – nods and laughter peppered with looks among Rotarians with the idea that all sexual relationships rely on some level of cliché and romantic tropes. Or as Woody Allen said, “we need the eggs.”

Rotarians scribbled away their partners’ top five emotional needs before tucking away the notes into their pockets.

But Zink didn’t stop there. He took the new information a step further.

He recommended sitting down with your spouse and writing out your own top five emotional needs: talk to find out what’s not being addressed.

“You can actually download Willard Harley’s book ‘His Needs, Her Needs,’ read it with a highlighter, buy two copies, highlight the things that jump out at you, have your spouse highlight the things that jump out at him or her, and then switch books and read what they were seeing,” he said. “And you’ll discover that you weren’t actually reading the same book. That’s because our brains are very different.”

Maybe the reason this country’s rate of divorce is 54 percent, Zink surmised, is because no one’s emotional needs are being met. Just remember: needs are not wants.

A neuro-psychotherapist in private practice in the Los Angeles area since 1976, Zink has been the psychotherapist for some of the most influential families in the world. A three-time graduate of the Jesuit University of Detroit Mercy, Zink completed his formal education with two years of post-doctoral work in neuro-psycholinguistics at the University of Michigan in 1974. He is a leading specialist in the areas of emotional disaster recovery, grief and loss, as well as trauma counseling.

He has been a consultant to the Young Presidents’ Organization for twenty-five years. In addition to his presentations on child discipline and on couples’ therapy, he has moderated hundreds of YPO Forums.

Zink has twice been honored by the Harvard University Business School for his work in family life development and named, along with Tiger Woods, as a “Hero of the Heart” by Children’s Hospital in Newport Beach, California. He is the author of “Building Positive Self-Concept in Kids;” “Motivating Kids;” “Ego States: Resolving Conflict; Dearly Beloved: Secrets of Successful Marriage;” “The Parents Your Parents Were Not; Face-It: Two Executives’ Lives;” “Upbringing: Raising Emotionally Intelligent Children;” and other numerous professional articles and monographs. He is also the co-author of “From I to WE: The Round Table Journey.” He is also the brother of Dr. Jeffrey Zink.

By mirrormmg September 4, 2015
in Life and Arts
Related Posts