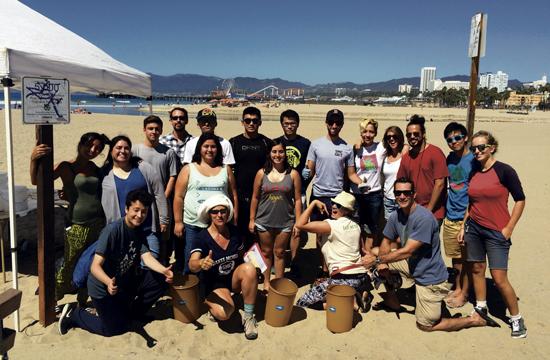 Despite the intense heat, a total of 1,800 volunteers picked up trash on the beach near the Santa Monica Pier during the 26th annual Coastal Cleanup Day Saturday, Sept. 19. For three hours between 9 a.m. – noon on that hot Saturday morning, volunteers collected 1,233 pounds of trash along the Santa Monica beach.

“It went very well,” said Art Salter, one of the site captains in charge in Santa Monica. “It looked like everyone had a good time and we feel it was a success.”

Even so, the number of volunteers was down a little from last year at Salter’s site. Part of the reason could have been the extreme heat as well as all the other events going on in Santa Monica during a busy Saturday.

But overall things still went well during Coastal Cleanup Day. Many of the items picked up included pieces of plastic, cans and bottles, and cigarettes on the beach. In some cases there were needles on the sand, and volunteers were told not to pick up sharp objects that could injure them. Clothing and blankets belonging to the homeless also was supposed to be left on the beach.

Volunteers of all ages took part in the event. Anyone under 18 had to be accompanied by an adult. There were lots of families and friends, a Girl Scout Troop and other local groups. Small groups of at least three people went up and down the beaches collecting trash in buckets.

SCUBA divers dove down into shallow waters near the Santa Monica Pier collecting trash as well.

Besides Santa Monica, thousands of other volunteers picked up trash along Los Angeles County Beaches and inland waterways as part of Coastal Cleanup Day. Trash was collected at more than 50 sites between Compton and Malibu.

SCUBA dive sites were also set up in Redondo Beach and Malibu and a kayak effort in Marina del Rey. The Bay Foundation also led volunteers on a special dune restoration at the bluffs above Dockweiler Bay.

Coastal Cleanup Day is an annual event at beaches around the world and is held in September. Led by the Ocean Conservancy, almost 600,000 international participants were expected this year in the annual tradition the “Guiness Book of World Records” calls the biggest single-day volunteer on the planet.

Statewide efforts are organized by the California Coastal Commission while work in Los Angeles County is led by Heal the Bay, a non-profit organization dedicated to grading beach water quality and engaging the community to help keep the coastline clean. It conducts cleanups throughout the Southland and operates the Santa Monica Pier.

“Heal the Bay was founded on the belief that one person can make a world of difference,” Programs Manager Alys Arenas said. “It’s gratifying to see so many people come out each year to protect what they love.”

This year, particpants were encouraged to bring their own bucket or reusable bag and gloves from home to collect debris. The “BYO” campaign hopes to reduce the waste created by the distribution of single-use disposable cleanup supplies.

By mirrormmg September 25, 2015
in Life and Arts
Related Posts