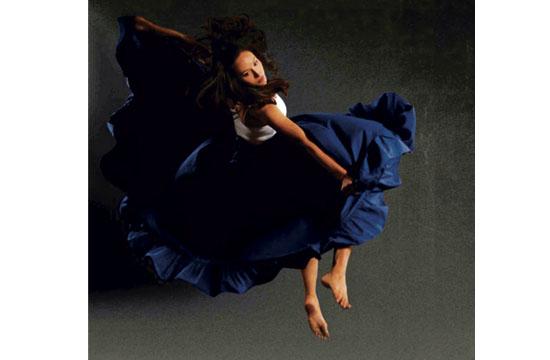 When dancer Bianca Blanco, 34, was a young girl, she described herself as very shy.

“I was not good at expressing myself verbally,” she said. “But when I had my first ballet lesson, I felt like I had been set free.”

About 20 years later, Blanco is still dancing, and now she is directing her own show about human connection.

Kinection Dance Project, which is a collaborative effort between Blanco and her former dance partner, Cesar Garfiaz, will debut on Oct. 17, 2015, in the theatre space at New Roads School in Santa Monica. It will feature a variety of styles including modern, salsa, house (primarily tied to electronic dance music) and some balletic influence from Blanco.

The show explores how humans reach out to each other and the ways technology has twisted and diluted deep interactions. Given the theme, the dancers aim to involve the audience and break the “fourth wall” between the performers and viewers, said Blanco. People will also have the option to construct a hand-written letter or postcard before the show and send it in a mailbox in the lobby. Blanco is also playing with the idea of including hand-written letters as set pieces onstage.

Blanco said part of the inspiration for her show came from the very different dance styles of her and Garfiaz.

“I’m a soft dancer with very long movements, and he’s more fierce and energetic,” she said. “[The show] is symbolic of how different people can exist and have harmony instead of conflict.”

Blanco met Garfiaz in 2010 while performing for the Contra Tiempo Urban Latin Dance Theatre in Los Angeles. The troupe focuses on bringing awareness to social justice issues through dance. For example, one show of which Blanco took part in 2011, Full Still Hungry, explored relationships with food and overconsumption.

Blanco’s experience with this company may have contributed to her desire to produce meaningful work. She said her goal for ‘Kinection,’ is “to leave people both dancing in their seats and reflecting on connection.”

The 5’8” Blanco is a transplant from Kalamazoo, Mich., who moved to Los Angeles to pursue dance in 2002. In addition to pursuing her passion, Blanco works at the Coalition For Engaged Education in Santa Monica, Calif. as an Executive Assistant to the founder, Paul Cummins. Her short, honey-blond hair hangs in waves to her shoulders, and she is quick to smile and laugh, leaving no trace of the shyness that plagued her as a child. She identifies as Venezuelan-American, as her father emigrated from the country. He passed away recently, so Blanco dedicated a piece in ‘Kinection’ to his memory. A decision, she said, that has helped her put her soul into the work.

From her first ballet lesson, Blanco has dedicated herself to the art of dance. When her parents could no longer afford lessons, she took on a work-study program cleaning the studio in exchange for classes. In high school, she won a scholarship to Interlochen Center for the Arts in Michigan. She then went on to attend Western Michigan University, also on a scholarship, to study dance.

“Performing is my absolute favorite thing,” she said. “I feel that I can be my most honest, vulnerable self. As soon as I step on the stage, I can be that person, I can give every inch of my soul to the audience.” Blanco said that after 13 years in LA, she has honed in on her “voice” in dance.

But while Blanco can bare it all onstage as a performer, she said feels even more exposed directing her own material.

“When you’re playing a part in someone else’s piece, at the end of the day, even if it’s not that good, it wasn’t your idea,” she said with a laugh. “Creating a show about human connection forces us to confront our own vulnerability. It’s exciting yet scary.”

All proceeds from the show will go towards the Coalition for Engaged Education, a nonprofit that is dedicated to creating opportunities for all students to have access to a quality education.

By mirrormmg September 1, 2015
in Life and Arts
Related Posts