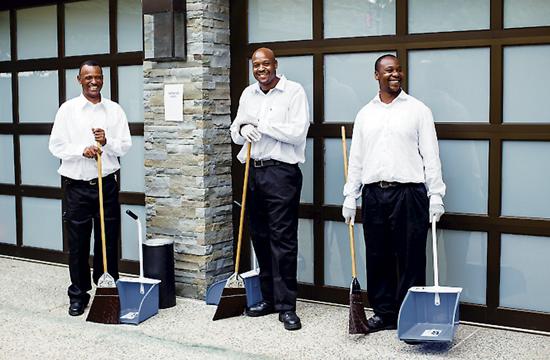 Homelessness continues to be a major concern in Santa Monica and throughout Los Angeles as well as the rest of the nation.

What can be done to help the homeless? What are the factors that contribute to someone being out on the streets, and what are the best ways to get them working and a productive member of society?

In Santa Monica, there are many city initiatives and programs being put into place to help this dire situation. One such program is “Chrysalis,” a partner of Downtown Santa Monica, Inc. with the goal of reducing homelessness in downtown. Through Chrysalis Enterprises, participants in the program are able to build their resumes and re-establish themselves in the workforce.

“Our mission is to help homeless and low-income individuals on a path to become self-suffi- cient by helping them get a job and keep it,” said Michael Graff-Weisner, Vice President of Pro- grams and Government for Chrysalis. “Our program focuses on giving people the skills to work. We have classes on job searching and can assist them with their resume’ and interview skills.”

He emphasized that “many of the clients that we serve are not homeless.” Mostly, it’s for people looking to rebuild their lives.

“If you haven’t worked for a long time we run a street maintenance business where people can do sweeping and other services,” Graff-Weisner said. “We also have office staffing jobs.”

The local service can also be a good way for needy individuals to find other employment.

“We take a chance on people so the next employer is more likely to give them a chance as well,” Graff-Weisner pointed out.

It appears that more people today need help finding a job or just making ends meet, and that’s where places like Chrysalis can make a difference. There are more than 700 homeless individuals in Santa Monica, according to Graff-Weisner. While that number is about the same as last year, “what went up was the street count (of homeless people). There’s a sense that it’s a more transient population. There might be certain individuals who are passing through town.”

In Downtown Santa Monica, the numbers of homeless individuals is rising. According to the DTSM’s annual report, there were 96 “unsheltered individuals” in January 2015, up from 59 in 2014. That’s a 63 percent increase.

High rents and living costs can put a person in a very vulnerable position, according to Graff-Wesner. “If you lose a job or have any kind of destabilizing life event, you’re kind of living on the margin there,” he added.

Besides Chrysalis, there are several other agencies in Santa Monica involved in the homeless crisis. Some of those programs include Project Homecoming (reuniting homeless individuals with family and friends), Chronic Homeless Project, and Homeless Community Court (legal issues).

And then there’s the Dolphin Change Program, where local residents can drop spare change into one of the dolphin statues located in Santa Monica. Money is collected by DTSM Inc. and granted to local agencies providing homeless services.

Since the Dolphin Program started, more than $156,000 has gone to local agencies replique montre breiling for use in their work toward permanent solutions to end street homelessness.

The homeless problem goes well beyond Santa Monica of course. In Los Angeles it’s long been an issue that’s plagued the city. More than 41,000 people are estimated to be homeless on a typical night in Los Angeles County, according to a report by the National Alliance to End Homelessness.