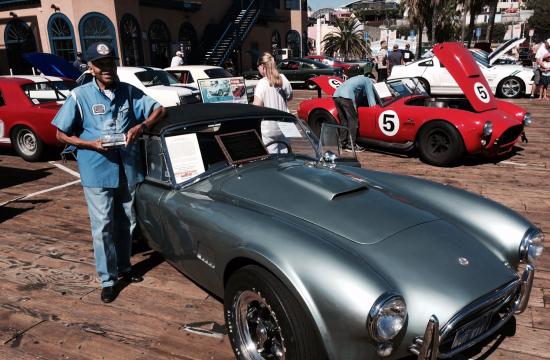 Comedian Jay Leno hasn’t been seen much since he departed as the host of “The Tonight Show,” but on Saturday, Sept. 19, the famous funny man was spotted at a car show on the Santa Monica Pier parking lot. A well-known collector of classic cars, Leno chatted with fans and took time out for photos with entrants in the L.A. Shelby Tony Sousa Memorial Car Show.

“This is an awesome event,” said Tony Raver, a classic car owner who was lucky enough to get a picture with Leno as well as talk to local visitors at the show. “This is the only event that I know of that Santa Monica allows on the Pier.”

There were more than 100 classic cars on display from the L.A. Chapter of the Shelby American Car Owners. The event featured the 50th anniversary of the Shelby GT350 Mustang as well as other famous vehicles.

Perhaps the most popular vehicle at the show was the 1965 289 Cobra Convertible, one of the fastest vehicles ever made reaching speeds of 200 mph. The owner of the Cobra, Hank Williams of Fontana, California, was at the event and greeted fans with a friendly demeanor. Williams was one of the first African American race car drivers and his 1965 Cobra has competed in 394 races during a winning 35-year span.

The Cobra was designed by former Ferrari race car driver Carroll Shelby. The performance of the Cobra was staggering and within five years of production it made history as one of the most exciting machines on the American road.

Williams was honored at the car show, as were several others at a ceremony held in the afternoon. Awards were given out for first and second place in various divisions. The “Best in Show” award went to the 1965 Shelby GT350 Mustang.

Greg Barbiera, the president of the Shelby American Automobile Club, felt the event in Santa Monica went over well with everyone.

“It was outstanding,” said Barbiera, a retired Santa Monica policeman.

While the show at the Pier was paying tribute to cars of the past, vehicles of the future were on display across town at the 10th annual AltCar Expo. The event featured a number of North American vehicle debuts, lectures and demonstration opportunities.

By mirrormmg September 24, 2015
in Life and Arts
Related Posts