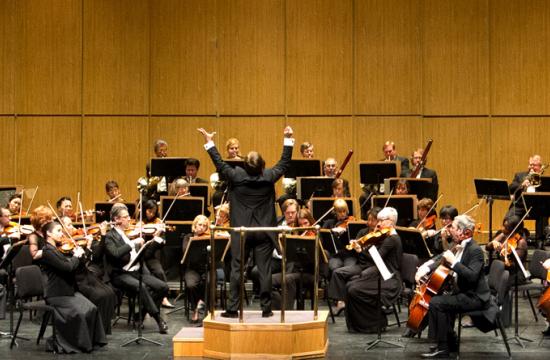 New West Symphony music director Marcelo Lehninger will lead the orchestra in the opening Masterpiece Series concert of the 2015/2016 season.

The program will also include Manuel de Falla’s Suite No. 1 from The Three Cornered Hat in its first performance by the New West Symphony and the Symphony No. 9 in E Minor, Opus 95 “From the New World” by Antonín Dvořák.

The first performance will take place on Thursday, October 1, 2015 at 7:30 pm at Santa Monica’s Barnum Hall, located at 601 Pico Boulevard in Santa Monica.

The program will be repeated on Friday, October 2, 2015 at the Oxnard Performing Arts Center, located at 800 Hobson Way in Oxnard and on Saturday, October 3, 2015 at 8:00 pm at the Thousand Oaks Civic Arts Plaza, located at 2100 Thousand

This lively and informative, 30-minute, pre-concert discussion about the music on the program begin one hour prior to the performances. The programs are free and open to ticket holders for the respective performances.

NPR describes Grammy-winning guitarist Jason Vieaux as, “perhaps the most precise and soulful classical guitarist of his generation,” and Gramophone magazine puts him “among the elite of today’s classical guitarists.” His most recent solo album, Play, won the 2015 Grammy Award for Best Classical Instrumental Solo. In June 2014, NPR named “Zapateado” from the album as one of its “50 Favorite Songs of 2014 (So Far).”

Manuel de Falla composed the music for the ballet The Three Cornered Hat for Sergei Diaghilev and his Ballet Russe. The work received its premiere by the Ballet Russe during the 1919 London season. The story of the ballet is based on a one-act farce set in the early 19th century about the attempted seduction of a miller’s wife by the local governor. The play was expanded to be performed as a full-length ballet. Falla later extracted two suites from the ballet.

Although Joquín Rodrigo was blind from the age of three, he became a skilled composer whose compositional output  includes orchestral and  choral works, concertos and works for solo instruments.

His most famous work was the Concierto de Aranjuez. The success of the work led to numerous commissions from among others, guitarists Andrés Segovia and Celendino Romero and his sons.Antonín Dvořák’s  “New World Symphony” was commissioned by the New York Philharmonic and received its premiere on December 16, 1893 at Carnegie Hall under the baton of Anton Seidl. Dvořák was strongly influenced by the various types of music he heard during his time living the America including African-American and native American. The Symphony hints at the use of actual melodies from these sources, but they probably don’t exist.

About the New West Symphony

Founded in 1995, the New West Symphony is a professional orchestra that draws its players from the rich talent pool of professional Los Angeles-area musicians. Led by music director Marcelo Lehninger, the Symphony is the resident company of the Oxnard Performing Arts Center, the Thousand Oaks Civic Arts Plaza, and Barnum Hall in Santa Monica.

By mirrormmg September 30, 2015
in Life and Arts
Related Posts