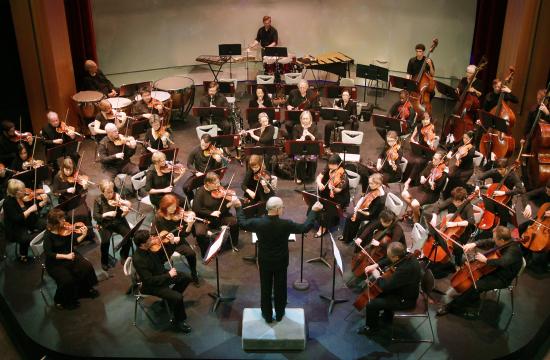 Orchestra Santa Monica is delighted to announce its fourth season of concerts, once again presenting four exciting programs under the baton of Music Director Allen Robert Gross in the acoustically and visually intimate Ann and Jerry Moss Theater. Highlights of the coming season include an all-Mozart concert, a Flamenco afternoon featuring concertos performed by guitarist Adam del Monte, music by American composers Samuel Barber and Russell Peck, and symphonies by Beethoven and Mendelssohn.

Music Director Gross is thrilled to present the new program to the orchestra’s growing audience. “We have a wonderful season of music planned for this year – lots of contrasts and compelling new music. The orchestra is playing beautifully, and our move into the Moss Theater last year has been an important step forward for us and for our audiences.”

Soloists for the season include soprano Elissa Johnston singing Barber’s nostalgic “Knoxville: Summer of 1915”, clarinetist Gary Bovyer performing Mozart’s Clarinet Concerto on the basset horn (the instrument for which Mozart wrote the piece), and pianist Steven Vanhauwaert performing Saint-Saëns’ brilliant Second Piano Concerto. Guitarist Del Monte will perform the ever-popular “Concierto de Aranjuez” by Rodrigo and his own “Paisajes,” a concerto for flamenco guitar. All four soloists have earned distinguished reputations in the Los Angeles area.

OSM has changed the time of its Sunday afternoon concerts this year from 3:30 pm to 2:30 pm. Ticket prices remain the same as last year ($30 General Admission, $25 for seniors, $15 for college students, and $10 for K-12 students), and can be purchased on-line or at the door.

“From America to Scotland”

“From France to Vienna”

For ticketing and pricing information, visit OSM’s website at www.orchestrasantamonica.org.

By mirrormmg September 28, 2015
in Life and Arts
Related Posts