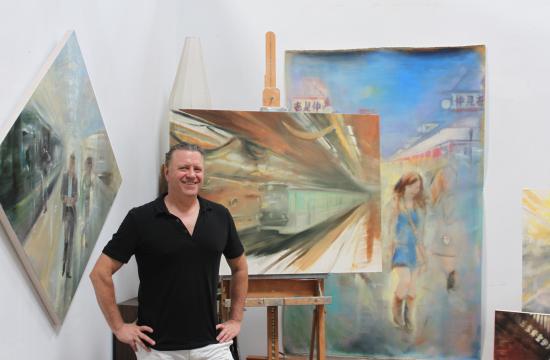 Acclaimed painter and illustrator Gregg Chadwick describes the Santa Monica Art Studios (SMAS) as “a jewel for the city.”

It might be more of a hidden gem, though, tucked away in hangar space at the Santa Monica Airport. But the artists seem to be happy and content drawing, painting, and sculpting in the sanctuary of their studio rooms.

Yet there’s a cloud of uncertainty hanging over the artists during these hot summer months.

That makes the future uncertain for many local artists.

“As a working artist it’s a stressful thing,” Chadwick said. “The idea of moving all my material and trying to find a new space takes away from the ability to concentrate on the work. It’s really uncertain.”

Chadwick has been working at the Santa Monica Art Studios since it first opened up to artists 11 years ago. He recently held a local show exhibiting his artwork and he feels a special bond and connection with the other artists.

“It’s a group of very dedicated artists,” Chadwick said of the SMAS. “Many of us have had long and successful careers exhibiting in art shows, galleries, and museums.”

Others just enjoy getting out of their house or apartment and working in a creative environment with other artists.

“I like the energy of having different artists around,” said Janine Brown, who shares a studio room with another artist. “When I moved from Connecticut to Los Angeles I didn’t know anyone but I was looking for the same type of community to have a studio. I was used to an environment where there were 25-30 artists.”

Currently, there are more than 30 artists working at the SMAS.

“Everybody does something different and you learn all kinds of things from each other,” said Deborah Lynn Irmas, a painter who shares studio space with Brown.

Irmas enjoys getting out of the house and creating in an environment with other artists.

“I would not do it at home,” she said of her artistic career. “It’s isolating. Artists need other artists to talk to and get support from.”

“Under the passionate, sincere and enthusiastic guidance and management of co-directors Sherry and Yossi, tenant artists are encouraged to involve ourselves with the community at large, conduct workshops, art tours, senior classes, tour groups, host gallery and museum directors and interact with students,” Nach stated.

Several of the artists seem concerned about the possibility of losing their current office space at the Santa Monica airport hangar.

“That would be awful,” Irmas said. “It’s very hard to find a community space. It’s frustrating. Artists are very isolated as it is and it’s nice to have a group of people to talk to. There are all kinds of things happening here.”

Brown said she has been through the uncertainty process before when she lived in Connecticut. Asked what she would do if the studio space in Santa Monica wasn’t available down the road, Brown replied: “I’m really not sure because my husband doesn’t like me working from home. So I’m not sure what I would do.”

“As one of the councilmembers who 15 years ago fought to make space at the airport a safe haven for local artists, I remain committed to retaining and expanding affordable studio options,” McKeown said. “When Santa Monica voters last November overwhelmingly approved Measure LC for local control of the airport land we own, that mandate included arts and cultural issues. As we renegotiate airport leases, I’m interested in assuring that the affordability is provided to the artists themselves, at the best rate we can fairly offer for public property.”

McKeown stressed that council has not yet taken action.

“The terms of a new lease have not been presented to us, and there is not even yet a date set for the matter to be on our agenda,” he stated in an email.

But for many creators at the Santa Monica Art Studios, they can only hope the studio space remains open to them in the future.

“I think the arts are so important in Santa Monica,” Chadwick said. “We believe in the arts and we want them to continue.”

By mirrormmg September 3, 2015
in Life and Arts
Related Posts