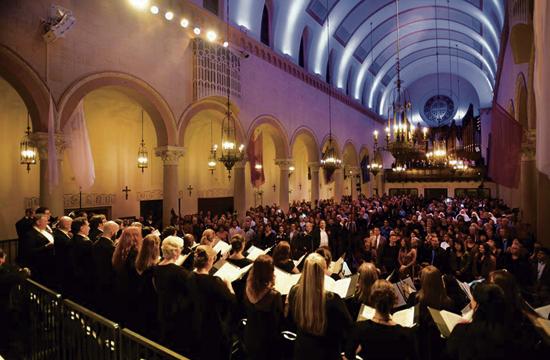 The concert will also include Mozart’s “Ave verum corpus” and conclude with “The Lord’s Prayer.”

“This will be a world-class performance by the highest level of musicians that represent Los Angeles,” Suk said. “Even the choir is the best-of-the-best singers gathered together. The audience can expect a very powerful, dramatic, operatic performance.”

The concert will be a tribute to Mozart and his powerful and brilliant music that continues to this day. Mozart was commissioned to compose the “Requiem” by Count Franz von Walsegg to commemorate the anniversary of his wife’s death. The work was left unfinished by Mozart’s death in 1791 and there has been much conjecture as to who may have finished the original work. Interpretations continue today. Mozart wrote “Ave verum corpus” six months before his death.

“Though mystery surrounds the ‘Requiem,’ it really doesn’t matter,” Suk explained. “There is no doubt that it is Mozart’s greatest masterpiece, and we’ve gathered together singers and musicians to make the evening memorable.”

The Dream Orchestra will be performing in a dream venue at St. Monica Catholic Church in Santa Monica.

“It’s one of the most beautiful architectural structures in all of Los Angeles,” Suk stated. “It’s contemporary but at the same time it has a wonderful European Gothic feeling.”

The event is limited to 700 seats.

This will be the Dream Orchestra’s third performance at St. Monica Catholic Church. Other performances are also scheduled during the 2015-16 orchestra season.

Tickets are still available for the Oct. 30 concert at St. Monica, but Suk suggests people reserve seats as soon as possible. The concert is scheduled to start at 8 pm.

Prices for tickets are $40 general, $30 for seniors and students and $150 for season tickets, and each ticket includes a post-concert Dessert Reception hosted by Urth Caffe.

By mirrormmg October 23, 2015
in Life and Arts
Related Posts