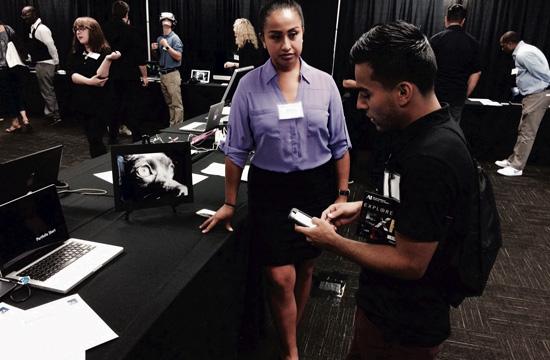 Trying to stand out in a competitive job market today can be difficult. But students at the prestigious Art Institute of California – Los Angeles in Santa Monica got the chance to show off their creative skills to professionals during a unique and fascinating “Portfolio Show” Thursday, Sept. 24.

There were all sorts of cool visual displays, short films, graphic art, and fashion – all things related to the creative arts. For many of the graduating students presenting displays that day, it was both the culmination of many years of hard work and the beginning of their career path.

“I didn’t know what to expect,” admitted Bolton Eckert, a digital video writer/director/editor who wants to work in the film and television industry someday. “It was my first interview process with potential career employers. But it was fun to meet different people. I probably met six or seven prospective employers. They were all really nice and friendly.”

Eckert is interested in documentary filmmaking and he’s already made some short films including one called “Disconnect.”

“It’s about a son who has moved off to a big city and he doesn’t connect as much to his dad anymore,” Eckert explained. “It’s about the strained relationship between a workaholic son and a retired father who wants to reconnect with his son.”

Eckert has worked in all facets of short film productions, and those skills could help him down the road. And he’s not picky about where he starts out in visual arts.

“It doesn’t matter,” he said. “Right now the movie and television industries are getting closer together with Netflix and everything else. It’s not like film is the Golden Standard anymore. There’s just as much great television as great movies being made.”

And then there’s “Youtube,” a good startup vehicle for those artists looking to promote short film clips.

“There are so many platforms right now and who knows what the future will bring,” Eckert said.

Eckert likes working in a variety of genres as well, including horror, comedy, drama, action, and sports.

“I don’t like to limit myself,” he said. “The important thing is to buy into the script and if it has a good story to tell.”

A big part of the Portfolio Show last week was students trying to get recognized and earn jobs. Eckert’s advice?

“Don’t be afraid and try to sell yourself. You can’t allow yourself to feel awkward. It’s all about presenting yourself in a way where other people will want to work with you. If you’re shy and timid you’re not going to be standing out as much.”

One art student who wants to stand out in the fashion design industry is Melissa Davis. Her business card reads, “I was BORN to do THIS,” certainly a good selling point to prospective employers. Davis recently graduated from the art institute in Santa Monica and now she starts the process of looking for work.

She would like to create visual store displays for large companies like Target and Bloomingdales and also hopes to design children’s clothing. Davis felt that her four years at the Santa Monica art school was well worth it.

“It’s definitely a good school to attend,” she said. “I learned a lot and it was a good experience.”

By mirrormmg October 2, 2015
in Life and Arts
Related Posts