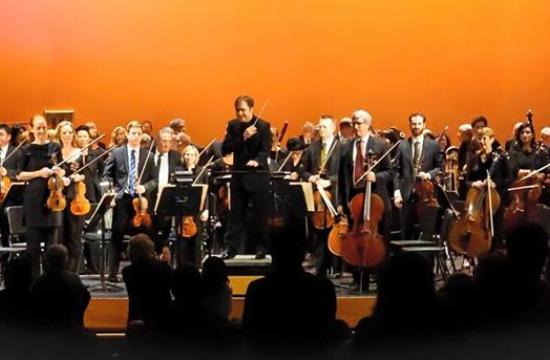 GRAMMY-nominated violinist Caroline Goulding will make her New West Symphony debut as guest soloist in “Scottish Fantasy,” an all-Mendelssohn program to be presented by the orchestra on Sunday, Nov. 8 at 4 pm at Santa Monica’s Barnum Hall. Also featured will be National Geographic photojournalist Jim Richardson’s stunning imagery of Scotland, with the acclaimed photojournalist present at the performance.

The Symphony’s second Masterpiece Series concert of its 2015-2016 season will include Felix Mendelssohn’s The Hebrides Overture, Opus 26 “Fingal’s Cave”; Concerto in E Minor for Violin & Orchestra, Opus 64; and Symphony No. 3 in A Minor, Opus 56 “Scottish.”

“I am very excited about this concert,” said Marcelo Lehninger, New West Symphony Music Director. “Not only will we feature a dynamic and virtuosic young violinist as our guest artist, but we will take our audience on a spectacular photographic journey to Scotland culminating with the pictures of Fingal’s Cave, which were taken from the same angle that Mendelssohn saw this magnificent natural formation.”

Caroline Goulding will be featured in Mendelssohn’s Violin Concerto, one of the composer’s most well-known works. The recipient of an Avery Fisher Career Grant, Ms. Goulding also received a GRAMMY nomination for her debut album on the Telarc label. Named “precociously gifted” by Gramophone magazine, she has appeared as a soloist with many of the world’s premier orchestras and in recital at Carnegie Hall, Lincoln Center, the Kennedy Center, and Beijing’s Forbidden City Concert Hall, among others. Ms. Goulding currently plays the General Kyd Stradivarius (c 1720), courtesy of Jonathan Moulds.

Scottish Fantasy will also delight concertgoers with a visual treat as the orchestra’s performance of The Hebrides Overture, “Fingal’s Cave” is accompanied by a video presentation of images taken by acclaimed National Geographic photojournalist Jim Richardson. This notable presentation will feature Scottish scenery, including photos from inside Fingal’s Cave, the most famous spot in Scotland’s wild Hebrides Islands and the inspiration for Mendelssohn’s piece. Mr. Richardson, who is known for his expertise in photographing the people, culture, and landscape of Scotland, will be present at the performance.

Scotland also inspired Mendelssohn’s Symphony No. 3, “Scottish” which he described as “a work of deep sensibility and manly melancholy that grew from the emotions that the stern Scottish landscape and history engendered.” It is considered his greatest work in this genre.

Prior to the concert, patrons are invited to Hear & Now Live, a 30-minute pre-concert talk providing enlightening information about the performance. Los Angeles-based composer, Adam Schoenberg, will be the speaker.

Tickets for this performance range from $29 to $102 and are available for purchase online 24/7 at www.NewWestSymphony.org, by calling 866.776.8400, or at the door the day of performance. Barnum Hall is located at 600 Olympic Blvd. in Santa Monica. The program will also be performed on Friday, Nov. 6 at 8 pm at the Oxnard Performing Arts Center, 800 Hobson Way in Oxnard and on Saturday, Nov. 7 at 8 pm at the Thousand Oaks Civic Arts Plaza in Thousand Oaks.

By mirrormmg November 6, 2015
in Life and Arts
Related Posts