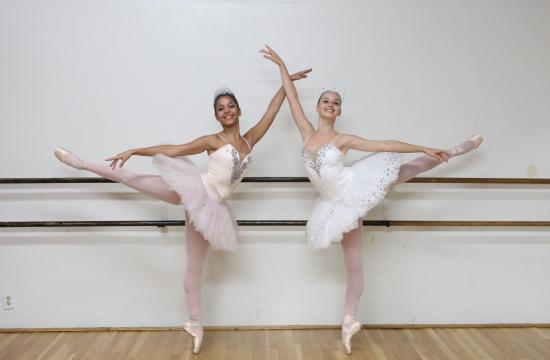 In its 5th decade of performances, Westside Ballet of Santa Monica, with live music by Santa Monica College Symphony Orchestra, returns to present its enchanting rendition of the holiday classic, “The Nutcracker.”

After selling out its 2013 and 2014 performances, the company announced its 2015 return to the Broad Stage at the Santa Monica Performing Arts Center will include a total of nine presentations scheduled from Nov. 28 – Dec. 6.

A visually stunning production by and for the community it serves, Westside Ballet of Santa Monica’s “The Nutcracker” features young dancers from the affiliated Westside School of Ballet, performing alongside acclaimed adult professional guest artists. Endearing children’s roles include party children, mice, and soldiers.

Martine Harley, Westside Ballet of Santa Monica Artistic Director says, “I am continually impressed by our students’ commitment to their ballet training–they are exceptional. They have an unsurpassed sense of teamwork, dedication and support for each other. I have held back tears as I watch our senior dancers work through what will be their last Nutcracker performances with us.”

Westside Ballet of Santa Monica’s “The Nutcracker” tells the story of Clara, a young girl who receives a Nutcracker for Christmas before being transported to The Kingdom of Sweets where she is entertained by dancing candies and childhood fantasy characters come-to-life.

Based on E.T.A. Hoffmann’s “The Nutcracker and the Mouse King” and the Marius Petipa classic, Westside’s rendition is the complete, traditional ballet, from the Victorian-style party scene to the glittering Sugar Plum Fairy.

As featured in the Los Angeles Times, the artistic direction captures the spirit of the legendary George Balanchine, passed on by Westside’s founder, Yvonne Mounsey, who created the Nutcracker role of Center Spanish during the peak of her career as principal dancer with New York City Ballet.

Westside Ballet of Santa Monica is proud to announce the casting of three Sugar Plum Fairy artists for the 2015 season. All of them received their formative training from Westside School of Ballet.

Lucia Connolly trained with Westside Ballet from the age of 4 to 16, and is now studying on a full scholarship at The School of American Ballet in New York, the official training school for the New York City Ballet.

Since its inception, Westside Ballet of Santa Monica has offered affordable performances and donated thousands of tickets to deserving community organizations.

For the third consecutive year, approximately one thousand elementary grade students in the Santa Monica-Malibu Unified School District will be treated to private, abbreviated, presentations of the Nutcracker held on Wednesday, Dec. 2, and Friday, Dec. 4. Children will hear a narrated version of the Nutcracker story and see excerpts from the ballet followed by Q&A with the dancers.

By mirrormmg November 20, 2015
in Life and Arts
Related Posts