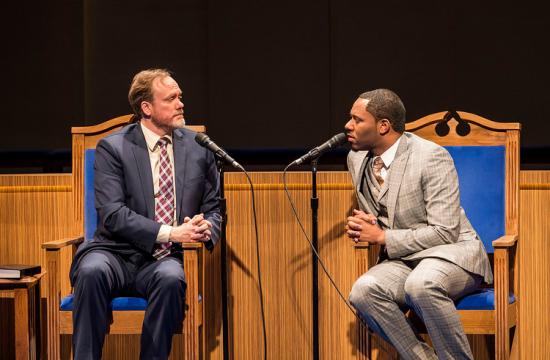 Pretend that it’s Sunday morning and you are tuning in to your favorite Evangelistic preacher. The Mark Taper Forum stage has been transformed into such a typical televised church setting, well done by set designer Dane Laffrey, augmented by Ben Stanton’s lighting design.

On the back wall looms a giant cross while next to it are two other crosses, which are more abstract. Lucas Hnath’s “The Christians” is a tedious 90-minute play performed without an intermission.

The opening scene, under the baton of Choir Director Scott Anthony, begins with two rousing songs by the choir. Following the singing and hand clapping, Paul, the head pastor well played by Andrew Garman, takes center stage and begins his sermon, which lasts about one-half hour – seriously, one-half-hour.

With his microphone in hand, he moves around the stage whipping the long cord out of his way. He talks about the growth of his congregation, which started out with just a few parishioners and today there are 3,000 members.

Pastor Paul has something very important on his mind and after a while says, “There is a crack in the foundation of this church.”

He tells the story of a young boy who goes into a burning building to save his sister. The boy winds up dying from the burns and a missionary comments that it’s too bad the boy was not a Christian as he was not eligible to get into heaven and therefore was doomed to an eternity in hell. So even though this young child acted without thought to his own safety, his reward for heroism was being sent to hell for being a non-believer.

Apparently, those comments caused Pastor Paul to experience an epiphany and while seated on his toilet, he hears the voice of God tell him there is no hell.

Now for Christians, who live a good life with the expectation they will be transported to heaven, hell has a big meaning as in that’s not place to spend eternity.  An organ recital comes at the end of this long sermon, followed by a rebuttal from Joshua, the associate pastor, passionately played by Larry Powell.  He challenges the notion that there is no hell and refers to passages in the bible, which Paul points out don’t actually say hell, and could have other meanings.  Joshua insists that Paul is going against God’s word and wants the congregation to cast their vote on staying or leaving the church.  Their preference is scribbled on a piece of paper placed in the collection plate and out of the huge congregation, only fifty people choose to leave.  So, the pastor wins by a majority vote. Joshua decides to leave that particular church, as he can’t abide by Paul’s new direction.  By removing the notion of hell, the pastor has really upset the liturgical apple cart and the ramifications will follow over the course of time.  If there is no threat of hell, what will motivate people to live good lives?

While it looks like the remaining congregation will accept the pastor’s new beliefs,  all is not well.  His wife Elizabeth, ably played by Linda Powell, is not happy at the turn of events.  They met on a flight from California to Florida.  Paul saw her walk down the aisle and was immediately smitten with the lady in pink.  He sent her a note delivered by one of the stewardesses and the rest is history.  Elizabeth is appalled at her husband’s new ideas and is not sure she wants to stay with him.  However, she ultimately agrees to stay, but says she will continue conducting her Bible Study classes, teaching the accepted tradition of the devil and his hell.

You know how someone starts with a compliment only to give you the old one-two punch? Jay, a church elder appropriately played by Philip Kerr, delivers such a punch. He starts out by complimenting Paul on his new path, but after a while tells him that the church misses Joshua and wants Paul to consider taking him back saying, “Did you have to be so quick in letting him go?”  Speaking on behalf of the board of directors, he voices their concern about the schism in the church and are fearful that more people will leave, “What good is a church that no one goes to.”

Jenny, a young church congregant is particularly disturbed and asks Paul if Hitler would go to heaven. She also wants to know if someone killed her son, would the murderer go to heaven? Paul answers yes on both counts. Jenny says, “That’s really hard to swallow.” She is also suspicious that his new revelation came the day after the building has been fully paid for, questioning his timing as being self-serving. Joshua reappears confessing that his own mother didn’t share his beliefs and he feared that she went straight to hell and was sad that he would never see her again.  He begs Paul to show him that hell doesn’t exist to which Paul replies, “You can’t show the absence of something.” All does not end the way this rogue pastor wants and one is left with some serious questions.

At the top of the play, I found myself scribbling a note saying “is this really a play?” as it was a long sermon that one could hear in any church. As far as the direction by Les Waters, the staging was acceptable but the use of microphones, with their long, dragging cords throughout the entire play, became redundant. Even when the characters were sitting side by side and talking to each other, they held their microphones, which didn’t make any theatrical sense. There was also the use of a “narrator” occasionally who would comment on the next action. This was way out of place and totally out of character with the rest of the narrative.

I suppose the bottom line is that this is not a well-written play but more an evening of diatribe. Perhaps Mr. Hnath used this play as way to sort out his own religious conflicts, but that’s only conjecture on my part. At one point, as I said earlier, Jenny, after hearing that even Hitler would go to heaven, says, “That’s really hard to swallow,” which encompasses my sentiments about the entire production.

By mirrormmg December 22, 2015
in Life and Arts
Related Posts