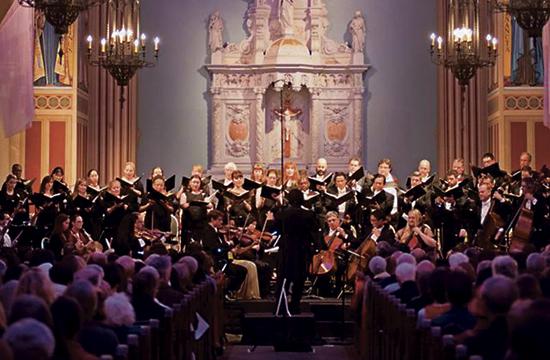 The Dream Orchestra’s performance of Handel’s ”Messiah” was so popular last year that two concerts are planned this year. The performances will be held this Thursday and Friday, Dec. 3 and 4, at St. Monica Catholic Church, 725 California Ave., Santa Monica.

“Messiah” is a great family tradition, and is a fun concert for the whole family. Though there are many “Messiah” performances and sing-alongs during the holiday season, Suk said these two shows were not to be missed.

“For me as an artist, I feel this will truly be the best Messiah performance in all of L.A.,” said Suk enthusiastically. “It’s like a different chef (the conductor) working with different ingredients – we will have the best singers, the best soloists and the best musicians to present the best ‘Messiah.’”

Those ingredients include the 36-voice Opera Chorus of Los Angeles, top singers selected by Suk from the LA Opera Chorus and the Los Angeles Master Chorale. With the talents of Benter, Berkman, Blackwell and Geis, Suk is bringing an operatic interpretation to “Messiah.”

The decision to add a second performance came from Monsignor Lloyd Torgerson, according to Suk.

Suk recalls the Monsignor’s words: “If people want to come we have to do it for the people. It’s not fair to those who couldn’t get to see it. Why don’t we just do it twice?”

Add to that musical recipe St. Monica’s intimate 700 seats and you’ve got a memorable holiday event.

Tickets are $40 general, $30 for seniors and students and $120 for season tickets (four shows) that include a post-concert festive Dessert Reception hosted by Urth Caffe. To purchase tickets, call 800.838.3006, visit brownpaperticket.com or www.dreamorchestra.org. Tickets are also available at St. Monica Catholic Church and all Urth Caffe locations.

George Frideric Handel wrote the oratorio “Messiah” in 1741, and it made its debut in Dublin in April 1742, premiering in London a year later. Scriptural text was compiled by Charles Jennens from the King James Bible. With its joyous “Hallelujah” chorus, “Messiah” has become a Christmas musical staple, even though it was originally a Lenten/Easter offering.

The Dream Orchestra’s 2015-2016 season is commemorating Pope Frances’ Jubilee of Mercy, and continues with the rarely performed “Stabat Mater” by Rossini on March 4, 2016.

The season continues on May 20, 2016 with what Suk is calling the “Rusty Musicians” concert created to make dreams come true for adults who play instruments or didn’t major in music or gave up their music, yet always had a dream to perform with a professional orchestra.

The final concert will be the “Dream Concert Under the Stars” on July 15, 2016. In addition to St. Monica Catholic Church and Urth Caffe, the Chan Il Foundation is also a partner in the Dream Orchestra’s 2015-2016 season.

By mirrormmg December 1, 2015
in Life and Arts
Related Posts