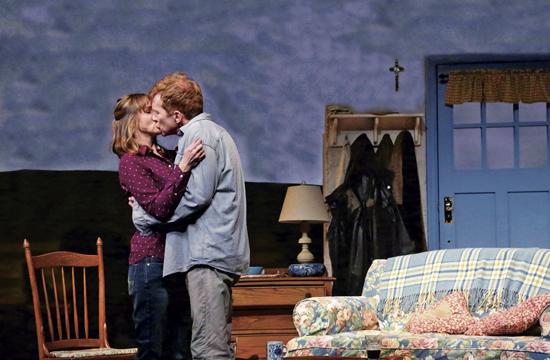 As a rule, a review doesn’t begin with a “thank you” note. That said, I feel compelled to express my deep gratitude to Irish playwrights, poets, and novelists – Irish American and those writers who live or lived in the Emerald Isle.

Embedded deeply in the Irish DNA is the extraordinary gift of words as expressed through various literary formats. Too numerous to list all of them, here is just a sampling of some of the most famous Irish-American writers: Eugene O’Neill,

Following in this rich literary tradition is John Patrick Shanley, an amazing writer who has written more than 23 plays. He earned a Pulitzer Prize for his riveting play “Doubt” and an Oscar for his screenplay “Moonstruck,” one of my personal favorites. I have watched it multiple times. One of my favorite scenes is when a completely glamorized Loretta (Cher) meets one-handed tuxedo-attired Ronny (Nicholas Cage,) at the Lincoln Center fountain for an evening of opera. It is a magical, unforgettable moment.

Therefore, one can assume that any material with Shanley’s named attached to it won’t disappoint and, indeed, his latest play “Outside Mullingar” is a wonderfully refreshing piece of writing. Under the astute direction of Randall Arney, the play comes to life in this delightful slice-of-life dramedy, which takes place in Ireland’s agricultural farmland.

At rise we are introduced to two elderly people who have been neighbors forever. Tony Reilly (Jarlath Conroy) and his neighbor Aoife Muldoon (Robin Pearson Rose) have just returned from burying her husband. She and Tony sit around the wooden table in his rustic farmhouse reminiscing about the past. They talk about growing old and eventually Tony brings up the topic of a piece of land he sold to her husband for 200 quid at a time when he needed some money.

It turned out that the sale caused much inconvenience as it changed his right-of-way, and access to his home is only gained after going through two gates, which have to be opened manually. During their conversation, he broaches the possibility of a buy back, but Aoife informs him that the deed now belongs to her daughter, Rosemary (Jessica Collins) who has no intention of relinquishing the property.

It seems that Tony’s son Anthony (Dan Donohue) pushed Rosemary down when she was six and he was twelve. She has carried a grudge all these years later and never quite forgave him. Rosemary also has had a crush on him for years but would never reveal her feelings, covering her attraction by asserting her independence.

Meanwhile, with Anthony seated at the table, Tony reveals that he’s thinking of leaving the farm to his nephew in America because he doesn’t think his son loves the farm, despite the fact that he does all the work. Of course, Anthony is quite upset with his father’s plan and both Aoife and Rosemary, who had been outside smoking a cigarette in the rain, intercede on his behalf. They finally convince Tony that his idea of leaving the farm to a virtual stranger, with no farming experience, was not a good one.

There is a passage of years and Anthony and Rosemary have inherited their respective farms, which by the way, are almost across the road from each other. Despite being neighbors, they haven’t seen each other in a very long time. Rosemary finally invites Anthony over for a visit.

Avoiding any relationship conversation, he offers to introduce her to his American cousin. Taking the bull by the horns, Rosemary demands to know why Anthony has never tried to court her. She badgers him until he finally confesses his bizarre secret, the reason why he’s never revealed his love for her. It’s beyond weird. Once he reveals his peculiar secret, and Rosemary tells him it doesn’t matter to her, they are now both free to love each other. When they finally kiss, the audience verbally responded with “ahh.”

Randall Arney’s direction of this tender play is superb. He keeps the action moving at just the right pace. He has guided his actors away from what could have been syrupy minefields into which this very talented ensemble could have fallen and turned it into a soap opera. Instead, the material, which touches on death, aging, inheritances, loyalty, and love, is presented in a very unsentimental, sometimes comedic way, but with the deep emotions inherent in the writing clearly present.

One always expects outstanding production values at the Geffen, and “Outside Mullingar” lives up to those expectations, beginning with Anthony T. Fanning’s multiple set design, which varies from the farmhouse, to the exterior, to the bedroom, where there is a touching scene with Anthony and his father, and finally to the field where Rosemary and Anthony have that long-awaited kiss. The scene changes are done in blackouts, which are covered by Peter Golub’s traditional Irish music. Adding to the excellent look are Daniel Ionazzi’s lighting design, and David Kay Mickelsen’s costumes.

With the every day violence to which we are subjected, both real, onscreen or television, it’s so refreshing to experience a tender slice-of-life story about these Irish farmers, presented to us by a gifted ensemble of skilled actors, each of whom delivers a highly textured characterization. So, thank you Mr. Shanley for gifting us with this lovely play.

By mirrormmg December 4, 2015
in Life and Arts
Related Posts