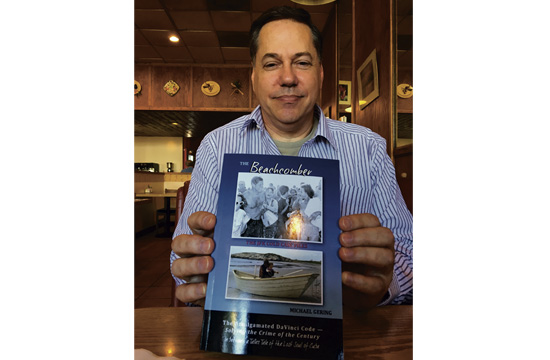 Michael Gering works at Pharmaca next to Vicente Foods in Brentwood. For 30 years he’s studied just about every book, video, photo, newspaper article and magazine interview pertaining to the assassination of President John F. Kennedy on Nov. 22, 1963, when Gering was just 4 years old.

Gering then spent the last 15 years writing a book – ““The Beachcomber”” – that combines a fictional character in Cuba, a non-fictional blow-by-blow description of the failed Bay of Pigs invasion, and an in-depth investigation and recitation of all the evidence and theories regarding the slaying of our 35th president.

This year marked the 53rd anniversary of JFK’s assassination and on Nov. 25, former Cuban leader Fidel Castro died. You can read all about it in ““The Beachcomber”” and try and connect the dots.

The years have made memories murky, especially as many who might have known anything about the events of the late 50s and early 60s have passed on – possibly killed – because of what they knew. Many people find the whole topic of JFK’s assassination so upsetting they can’t deal with it. Plus it’s all very complicated. Many people, many theories, many secrets.

Reading “The Beachcomber” will be very painful for those who remember the assassination. I was 12 and the memories still make me cry to this day. But the book drills deep and shows how mysteriously intertwined all this was:

Castro was mad at Kennedy for failed assassination attempts, the Bay of Pigs Invasion, and the economic embargo imposed by the U.S. The Russians, friends of Castro, were mad about how the Cuban Missile Crisis unfolded (their missiles were removed as part of the deal.)

Many Cubans, exiled at this time to Florida, were mad at Kennedy for pulling the plug on the air support that might have allowed the invasion to succeed. These Cubans wanted to get back in and pick up where they left off before Castro ousted Batista in 1959. Many had big economic interests, including ownership of many nightclubs and gambling establishments that attracted mafia money. Havana was a very happening place pre-Castro.

Adding fuel to the fire, Bobby Kennedy turned up the investigative heat on organized crime while serving as JFK’s attorney general. But it came on the heels of the 1960 election, which some thought was stolen with the help of the mafia in Illinois. If true, the mafia was mad for other reasons in addition to lost income from Cuba. Adding to the murkiness was the fact JFK and one mafia leader shared a girlfriend. But it doesn’t stop there.

Nixon was mad at Kennedy over the 1960 election results. LBJ was reportedly upset because there were rumors that Kennedy would dump him from the ticket in 1964 – an idea publicly floated by Richard Nixon. But the CIA was perhaps maddest of all at Kennedy, according to Gering, because in the aftermath of the Bay of Pigs failure (which Kennedy attributed to bad intelligence coming from the CIA), the Kennedy brothers pretty much dismantled the CIA power structure, post-invasion. Several top CIA officials were fired or moved into lesser jobs.

Even young George H.W. Bush is part of the story. Bush was in charge of the National Republican Committee at the time of Nixon’s Watergate scandal (and later head of the CIA.)  But long before this, his father, Prescott Bush, a senator from Connecticut, was an early financial backer of Nixon. The Nixon/Bush ties run deep, according to Gering.

Gering states Nixon was tasked with planning the Bay of Pigs invasion while serving as vice president to Dwight Eisenhower. The actual invasion didn’t take place until Kennedy took office in 1961. But Nixon was still there to carry it out.

When Kennedy decided to go ahead with the invasion and then changed his mind (withdrawing air support and then later blaming the whole fiasco on the CIA), the CIA and Nixon couldn’t take it anymore, according to Gering. It was time for revenge.

But how could all of these angry people (and there were many more, according to Gering), conspire and successfully pull off an act as bold as killing the president? Gering says he doesn’t really know, but he believes it to be true.

According to Gering, Lee Harvey Oswald was set up by the real assassins to take the fall once Kennedy was killed and that there were several shooters in Dallas that day, including some stationed several floors above Oswald in the book depository. Several teams of shooters were operating independently so if one team failed, another might succeed.

And why was Jack Ruby so motivated to kill Oswald? Surely he was no broken-hearted patriot.

Gering does an eye-opening job of linking all this together, including naming operatives who were all physically present during the Cuban operation, in Dallas on the day of the assassination, and directly involved with the Watergate break-in, in 1972. That’s a lot of coincidences.

Nixon had many Cuban friends, from high-up financiers like Bebe Rebozo to cloak-and-dagger operatives like Virgilio Gonzales and Eugenio Martinez (Watergate burglars, along with James McCord, Frank Sturgis and Bernard Barker – all former CIA and FBI.) E. Howard Hunt and Gordon Liddy also come into play in “The Beachcomber.” Gering believes the infamous 18-minute gap in the Nixon tapes wasn’t about Watergate but the Kennedy assassination.

It’s almost hard to believe all this darkness could take place right here in America, but we are chastened now. Cuba, Vietnam, Iraq and Afghanistan. It’s all about the money, according to Gering.

Top officials in the intelligence community, the armed forces, and big defense contractors all benefit whenever war breaks out. Gering believes these forces help bring about these wars via disinformation (Gulf of Tonkin; weapons of mass destruction in Iraq; etc.) planted by people who would benefit financially from another war. This is perhaps the biggest takeaway from “The Beachcomber,” according to Gering: It’s time to put an end to the cycle that destroys lives and wipes out our treasury.

Beachcomber is the name of the main character of the fictional part of the book. He’s a lonely, homeless man hanging out on a beach in Cuba. He rescues people from drowning, has a difficult family life, but does his best to make his little corner of the world a better place. It’s hard not to think of Michael Gering as “The Beachcomber.” He has spent countless hours putting together the evidence and the theories. When his spirits flagged, he was encouraged by people like the late comedian George Carlin and TV producer David Milch (“NYPD Blue,” “Hill Street Blues,” HBO’s “Luck”).  Gering admits, “You’d have to be crazy to try to unravel the JFK cold case,” but contends he’s “really onto something.”

Gering hopes one day someone really figures all this out in a definitive way. At least, in “The Beachcomber” he tried.

By admin December 14, 2016
in Life and Arts
Related Posts