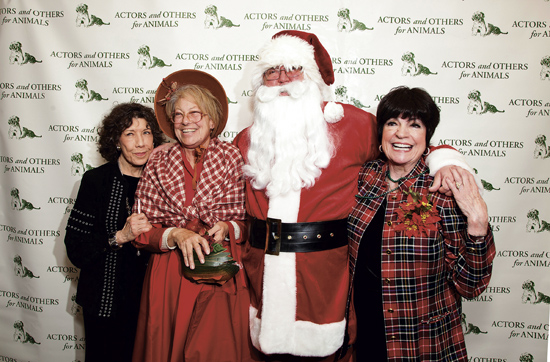 Actors and Others for Animals, one of the oldest animal welfare organizations in Los Angeles, celebrated their furry family members at the annual Joy to the Animals Luncheon and fundraiser at the Universal City Hilton and Towers December 4, 2016. Awards were presented to Laurie and Peter Marshall, Loretta Swit, and Erin and George Pennacchio. Comedian Paula Poundstone and ventriloquist Jay Johnson provided entertainment. A holiday boutique and silent auction were also featured.

Founded in 1971 by the late actor Richard Basehart, his wife Diana and others in the entertainment community, Actors and Others has a core mission to eliminate pet overpopulation and ensure good care and protection for pet companions. All proceeds from fundraising efforts provide spay, neuter and veterinary assistance for the animals that share the lives of low or fixed income pet guardians. Event sponsors include the Petco Foundation, Sherry and Skip Miller and Carolyn and John Yurtchuck.

Well loved comedian JoAnne Worley, currently heads up the organization. “As president and a founding member of Actors and Others, I’m so proud of the fine work we do. My little rescue dog, Harmony, reminds me every day that caring for animal companions is very important work as they share our homes and our hearts,” Worley said.

Lily Tomlin presented The Paul Jolly Award of Caring to George and Erin Pennacchio and Laurie and Peter Marshall. Paul Jolly was the head of the Petco Foundation and a vital part of Actors and Others for Animals for over 25 years until his untimely death in 2014. The award is given to individuals who carry on his commitment and inspiration and have shown compassion and caring when it comes to animals.

“M*A*S*H” alum Jamie Farr presented his past co-star, actress Loretta Swit, with the Betty White Inspirational Award. This recognition is given to an individual who has shown both personal and public commitment to the well being of animals and has influenced awareness of their importance in both our world and our homes and their need for protection and care. Loretta Swit captured the imagination of generations of television audiences with her portrayal of hot headed, soft hearted, hilarious Major Margaret Houlihan in one of TV’s most beloved series, “M*A*S*H.” She has been honored with numerous awards including the People’s Choice Award, two Emmy Awards along with ten Emmy nominations, and four nominations for the Golden Globe. Swit is a veteran Broadway actress, having made her Broadway debut in Same Time, Next Year opposite Ted Bessell. She has appeared in countless televisions shows, made for TV movies, and more than 15 big screen films. Swit is as impassioned about animals as she is about the arts and has received more than ten awards from animal protection organizations around the globe. She is the author of SwitHeart: the Watercolour Artistry & Animal Activism of Loretta Swit, a chronical of her work as an artist and activist, to be released in January, 2017.

By admin December 17, 2016
in Life and Arts
Related Posts