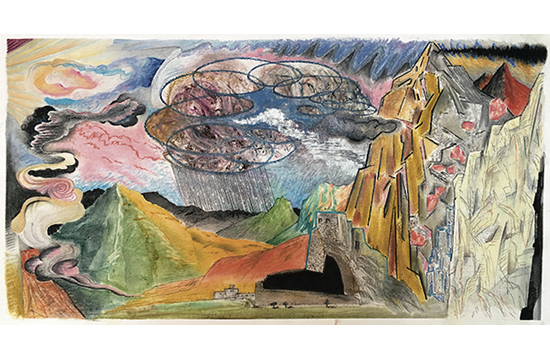 On Saturday, January 21, the Craig Krull gallery located in unit B3 at the Bergamot Station Arts Complex, hosted an opening reception for three new exhibits: Pierre Picot’s “Prosaic / Noteworthy,” Roast Hoggmann’s “The World is Flat,” and “White on White; A Group Show.” All three exhibitions will be on display through February 25.

Gallery owner Krull explained that Picot’s work drew from two main influences: French comic book art, from which he was inspired to paint in bold and vibrant colors and elongated landscapes, and the Brittany region of France (Picot has homes in both Brittany and Los Angeles) in which the weather can suddenly change from rainy to sunny to windy.

“It’s such a romantic kind of shifting. The climate influenced his paintings,” Krull told The Mirror. “The spacing and the visual narrative of those landscapes has a comic book quality as well.”

Roast Hoggmann, whose name is meant to evoke the animal characters that populate his works, was initially introduced to the Craig Krull gallery in a group show of artists who used paint as a sculptural material.

“I admired the work then and offered him a solo show shortly thereafter,” said Krull.

Hoggmann, who is from Indiana, is showcasing his works in Southern California for the first time at this exhibition. His works not only depict cartoonish animals, but mythical creatures like yetis, many-eyeballed monsters and a grim reaper-like figure.

Finally, “White on White” is a group show in which all of the works are centered on the color white, in a variety of mediums.

“I hardly every do group shows but I decided to do a collection on ‘white,’” said Krull.

For more information about past, current and upcoming exhibits at the Craig Krull gallery, visit craigkrullgallery.com.