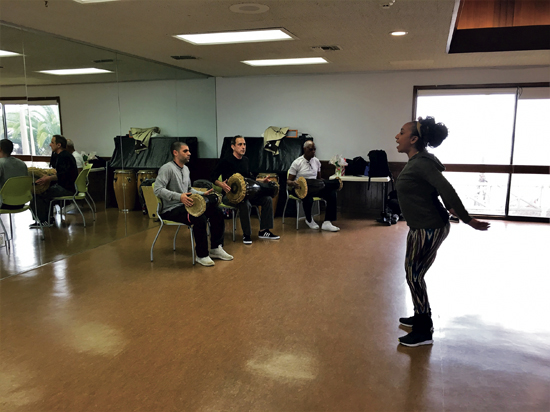 “I went to a national arts school in Cuba, and I graduated from there. That’s when I learned all disciplines in Cuban-style dances, like Afro-Cuban and all that. And that’s what I teach,” said Hernandez.

Her workshop on the 7th began with a nearly two hour-long segment called “Fundamentals of Afro-Cuban Dance” that featured three live drummers providing musical accompaniment. Then, after a break, Hernandez taught what she titled “Casino Cuban-Style Salsa,” which included two hours of instruction for beginners, and ended with an hour of guided practice and social dancing.

“Today was completely fundamentals. The intention today was to get new people interested and introduce them to this so they will hopefully continue,” said Hernandez.

Hernandez, who has been in Los Angeles for nine years, originally visited the country during a tour, and ultimately decided to stay. As soon as her performance contract was up, she made the transition from dance performer to dance instructor.

Alongside salsa dancing, which she teaches regularly on various days throughout the week, Hernandez offers courses in Cuban Rumba dancing and a style of dance she pioneered called Oricha Therapy.

“It’s something I created to adapt Afro-Cuban rhythms to an American audience,” said Hernandez.