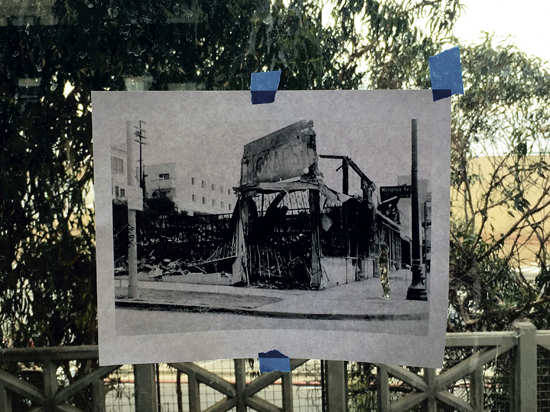 On Jan. 4, the Camera Obscura Art Lab began hosting Grace Hwang as its newest resident artist, and will continue to through April 15. Hwang’s past work has been focused on movement, which will factor into the work created during her residency, as will workshops in other mediums, including one held on Saturday, January 7th titled “Collaging Remembrance and Forgetting.”

The thematic through-line of Hwang’s residency is the 1992 uprising in Los Angeles following the violent arrest of Rodney King. In her workshop on Jan. 7, Hwang and her participants took clippings from American and Korean news sources about the uprising, and used cut-and-paste and layering techniques to create unique collages.

“My collaborator Heisue [Chung-Matheu] and I are preparing for a performance at Highways in February. But really, I just wanted to spend this year thinking about [the Uprising]. I just moved back to L.A. two years ago from Portland and before that New York, but I was born and raised here, and I was 12 when it happened, living in the Valley. I think that having moved back to L.A. it was constantly on my mind. I was just thinking, ‘I need to resolve my feelings about this event.’ So the opportunity came up to do it through performance,” said Hwang.

Hwang’s final performance, alongside being showcased at the Highways Performance Space on Feb. 10 and 11, will be shown at the Hammer Museum’s Rhizomatic Performance Lab on Jan. 24 and at the Camera Obscura Art Lab on April 15. In experimenting with its content and medium, the participants in her workshops will be directly contributing to her final work.

“In the future, to think about if and when conflicts between races and conflicts with the police happen again, I think the process of having gone through this will help move from understanding to action,” said Hwang. “I think it’s important to do that with people. I love that this is a community space. I wanted to do this research in public with people instead of by myself. The performance in April will be some sort of culminating thing of all the things that were generated in the workshops with the people,” said Hwang.

Hwang will be hosting upcoming workshops on papermaking, zine-making and more. For more information about these and other upcoming workshops, follow the Camera Obscura Art Lab on Facebook at facebook.com/1450Ocean.