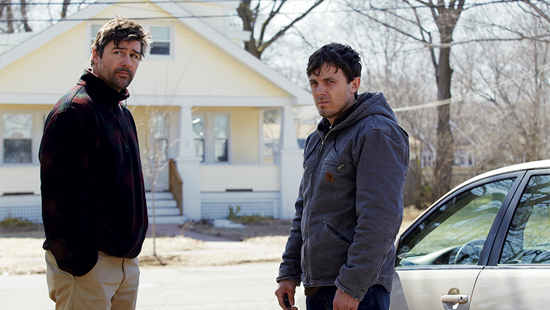 “Manchester by the Sea,” a film starring Casey Affleck as Lee and Lucas Hedges as his teenage nephew Patrick, is a heartbreaking exploration of grief.

Early on, Lee learns that his brother Joseph (Kyle Chandler) has died suddenly and as a result has to start taking care of his nephew. Lee is a janitor who lives by himself and tries to keep a low profile in Quincy, Massachusetts. Through flashbacks, we learn that he once was married to Randi (Michelle Williams), whom he had kids with.

Lee breaks the news to his nephew at the nephew’s hockey practice. Patrick is a confident, almost cocky adolescent, who is a jock and is used to getting his way. He is also balancing two girlfriends on the side. While some might find his behavior a bit off-putting, the way he conducted himself did not really bother me, as I found that his mindset is typical of teenagers. While most probably are not going back-and-forth with two romantic relationships simultaneously, his preoccupation with sexual matters, wanting to be part of a garage band, and partaking in sports all struck me as normal behavior for that age.

Understandably, things get off to a rocky start between uncle and nephew in their interactions together. It does not help matters that Lee, who has been staying with Patrick during this difficult time in Patrick’s town of Manchester, also in Massachusetts, wants the two of them to move back to Quincy. Patrick remarks that it would be a complete upheaval for him if he were to move to Quincy, as he would have to leave his friends behind and start all over. He adds that Lee could get a job as a janitor anywhere.

Michelle Williams makes a strong impression as Lee’s ex-wife in her limited screen time. The performance is raw, vulnerable, and reminiscent in ways of Williams’ work in the movie “Blue Valentine.”

Casey Affleck, meanwhile, gives a restrained, quietly understated performance of much power. He has been haunted for some time by a lapse in judgment he made one night that he has never been able to forgive himself for. Affleck makes this pain clearly felt in his mannerisms, how he carries himself, and his words.

Lucas Hedges as an adolescent going through unimaginable grief is a real discovery, giving a breakthrough performance that really resonates. The way he interacts with his uncle, his two female lovers, and his friends comes across as authentic and believable.

I found the music being played during an interrogation scene to be overbearing. Also, the flashbacks at times were not smoothly incorporated, so as a result they could be confusing.

The writing and directing are first-rate and the story despite its somber subject matter manages humorous moments, which helps balance out the downbeat nature of the narrative. No easy answers are provided in a picture with a realistic feel throughout.