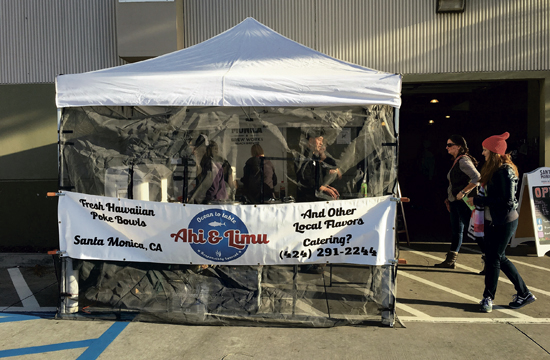 Santa Monica Brew Works has been a staple of the local beer scene during its two and a half years of existence, and four months ago owners opened a tasting room on its premises on Colorado Avenue. On Saturday, January 21, Santa Monica Brew Works teamed up with local poke vendor Ahi & Limu for a full day of poke & beer.

Initially, Ahi & Limu – who don’t have a brick and mortar location but rather set up shop regularly at farmer’s markets as well as special events, like this one – reached out to the brewery about the collaborative event.

“They didn’t know initially how poke and beer would go together,” said Jamie Rugg, who is one of the co-founders of Ahi & Limu.

After setting up a tasting for the brewery, they were in. The event was largely promoted on social media, between the online followings of both Ahi & Limu and Santa Monica Brew Works.

On the day of the event, a chalkboard was set up at the entrance of the brewery, giving patrons suggested poke and beer pairings. Public response was enthusiastic, with the tasting room’s large premises constantly full with many dozens of patrons, steadily filtering in and out throughout the afternoon.

“We’ve been getting very, very busy lately, but this definitely has brought in some extra people. Also, the food is very good,” said Santa Monica Brew Works co-founder Carl Sharpley.

Santa Monica Brew Works’ beers are diverse, ranging from staples like pale ales and porters, to of-the-moment styles like an unfiltered double IPA and a cucumber kolsch.

“We like to mix it up. People seem to dig that,” said Sharpley.