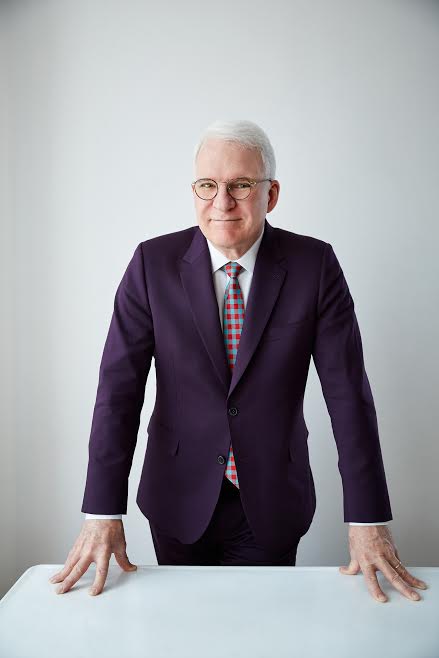 Steve Martin, the iconic actor, author, playwright and musician will bring his own brand of humor to the SABAN Theatre in Beverly Hills on Sunday, January 8, 2017 at 7:00pm.  Great seats to the evening are still available as part of a subscription package which includes Vin Scully, Ayaan Hirsi Ali and Scott Kelly.

Martin is one of the most legendary and diversified performers in the entertainment industry today. He’s a comedian, actor, stand-up giant, author, screenwriter, art curator, playwright, producer and musician.  Martin’s film roles have forever been ingrained into our popular culture.  The Jerk; Dead Men Don’t Wear Plaid; Three Amigos!; Roxanne; Planes, Trains &Automobiles; Dirty Rotten Scoundrels; Parenthood; L.A. Story; Father of the Bride; The Out of Towners; Cheaper by The Dozen; The Pink Panther…are some of the films for which Martin has earned millions of fans worldwide.

He’s hosted the Academy Awards three times and Saturday Night Live more than anyone. He’s won four Grammy awards–two for comedy and two for his banjo CDs, and yet he also keeps busy off-stage, collecting art, playing the banjo and writing. Martin is a best-selling author of numerous books and talented playwright as well.  Martin was recently recognized with five Tony Award nominations, including Best Musical for Bright Star, the original work he co-wrote with Edie Brickell.

The Distinguished Speaker Series is held at the Saban Theatre, 8440 Wilshire Blvd., Beverly Hills.  Martin’s program begins at 7:00pm.  Martin is third of six talks offered as part of the Distinguished Speaker Series.  He will be followed by Ayaan Hirsi Ali (February 19), Vin Scully (March 19), and conclude with astronaut Scott Kelly (May 7) His evening will conclude with a half-hour unfiltered and candid question and answer session.  Individual tickets to Steve Martin are not available. He and the remaining series speakers are only available in a subscription package which range from $224  to $320, and can be purchased by visiting our web site at www.speakersla.com  or by calling (310) 546-6222r.  The Distinguished Speaker Series of the Westside is sponsored by City National Bank, Beverly Hilton, Union Bank, KNX 1070 and Global Wealth Solutions Group of Raymond James