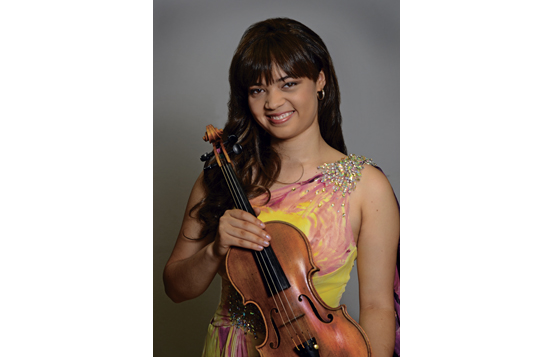 While the program had been selected months earlier, it turned out that the sheet music for Hailstork’s Epitaph was lost. “This was a real crisis for me,” said SMS Music Director Guido Lamell. “I couldn’t imagine a more appropriate and beautiful piece for this concert and I was devastated when publisher after publisher, spanning months of inquiries, informed me that no copies could be found anywhere! Adolphus Hailstork is one of the world’s greatest African-American composers and he wrote to me with sadness that he had kept no copies either.” A week before the concert, one of the Los Angeles Philharmonic’s assistant librarians, Martha Frear helped in locating ac copy, and the program will continue as planned.

Samuel Barber’s Violin Concerto is the second piece and will highlight Annelle Gregory. “We are very happy and privileged to showcase Annelle in this concert,” said Lamell. “This is one of my favorite violin concertos, so it means a lot to me to have found Annelle with her incredibly beautiful sound and spectacular technique.”

Aaron Copland’s Appalachian Spring is “an overwhelming favorite in the American classical repertoire,” Lamell said. “It’s a great showpiece for our Santa Monica Symphony and I know these wonderful themes will stay with you long after the concert ends.”

The concert will close with the Symphony’s traditional sing-along of “We Shall Overcome.”