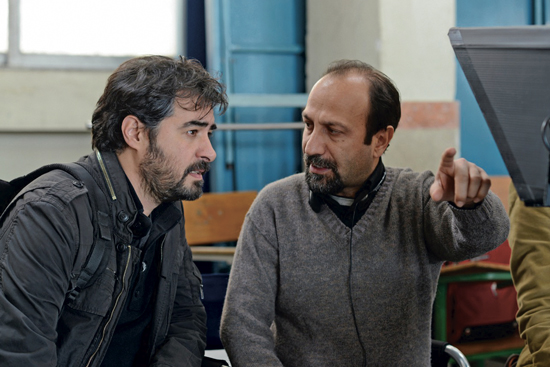 Anytime you see Cohen Media Group in the opening credits, you can be quite sure that you are about to see a quality foreign film. Among some of the films in this prolific group’s collection are: “Timbuktu,” “Marguerite,” (four César Awards) “Rams,” “Mustang,” “The People vs. Fritz Bauer,” “My Old Lady,” “Le Chef,” “Breathe In,” and the wonderful documentary, “Deli Man.” In keeping with their impeccable record of producing and/or distributing award-worthy movies comes “The Salesman,” Iran’s submission for the Best Foreign Language Film Academy Award. This powerful film has already racked up three wins and six nominations.

“The Salesman,” brilliantly written and directed by Asghar Farhadi, stars Shahab Hosseini as Emad and Taraneh Alidoosti as his wife Rana who is an actress. Emad is a teacher and a member of the same acting company. They are both in rehearsals for Arthur Miller’s “Death of a Salesman.”

The story opens with the imminent collapse of the apartment building in which they live, forcing all the tenants to evacuate immediately. The opening crack is symbolic of the ensuing tear in their relationship. Through a friend, they find another apartment, but discover that the last tenant had left all her belongings behind. Apparently, she had a lot of male “visitors,” and moved out rather suddenly. Emad and Rana go about removing her property to an outside shed with the hopes the elusive owner will return. All is well, for the moment at least. Emad is not home and Rana decides to take a shower. Just then the apartment bell rings and thinking it’s her husband, she hits the buzzer and leaves the front door ajar. What follows is a brutal attack, which thankfully the director spares us from witnessing. Rana is traumatized physically and emotionally and begins to have difficulty functioning. Emad wants to go to the police but Rana does not want to be put through the interrogation of what happened and would rather forget the whole episode. Reluctantly, although obsessed with finding the perpetrator, he begins to clean up the crime scene, getting rid of the blood and any other traces of the attack. His wife is badly bruised but tries to continue with the rehearsals. However, she goes up on her lines and walks out in the middle of a scene. She becomes more and more frightened and reclusive.

Determined to track down his wife’s attacker, the haunting narrative takes an unexpected turn as the obsessed Emad systematically begins to assemble evidence, including an abandoned pick-up truck, and little by little hones in on the guilty party. However, the more obsessed he becomes, the deeper the chasm in this once loving, happy relationship.

The fascinating direction and impeccable writing, delicately illuminates the deconstruction of a marriage, Iran’s social mores as they pertain to women, and gives a one-two punch with the unexpected dénouement. The compelling story telling will keep you on the edge of your seat until the final scene. Coupled with the riveting performances given by Shahab Hosseini and Taraneh Alidoosti, as well as the supporting cast, “The Salesman” is one film you will want to see before Oscar night.