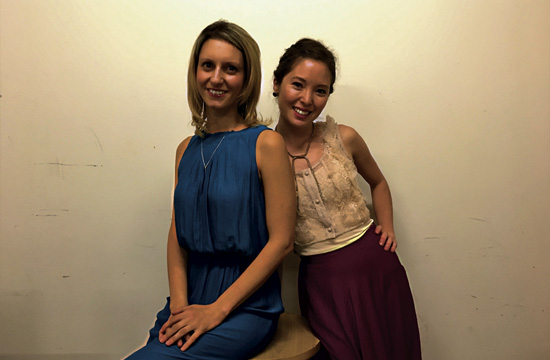 Attendees were lined up outside 20 minutes before the doors opened and the space was filled to capacity well before the performance began. The audience welcomed Spurney and Stern to the stage with raucous applause.

Between their pieces at Saturday’s event, the duo talked to the audience about the larger historical context of the works they were presenting. Following their opening performance of George Gershwin’s “Drifting Along With the Tide,” they discussed how the piece was transcribed from a wax cylinder.

A screen projecting a variety of backdrops, including recorded performances of ballets, for which some of the pieces were originally written, also accompanied their performances.

Spurney and Stern said they drew on their teaching experience when deciding to include the visuals. They noted that their students were often more receptive to classical pieces with visual accompaniment.

“I’ve shared these videos with my kids before,” Spurney said. “And they can’t separate the music from the videos.”

Spurney and Stern decided to bring their dueling pianos show to Santa Monica because the large performance hall is an ideal space for a two-piano classical performance. They said performing on two pianos creates a unique logistical problem. Not only is it difficult to find a venue to accommodate two pianos, but also finding practice space isn’t easy either.

There was also another reason they chose to perform in Santa Monica. Spurney lives here. “I’m super local,” she quipped. “I walked here today.”

The next classical music performance at the Santa Monica Public Library’s main branch will be Unknown Romantic Masterpieces by Delius & Reger, Part 2, on Sun. Feb. 12 at 2 p.m. For more information, visit smpl.org/MainLibrary.aspx.

By admin February 14, 2017
in Life and Arts
Related Posts