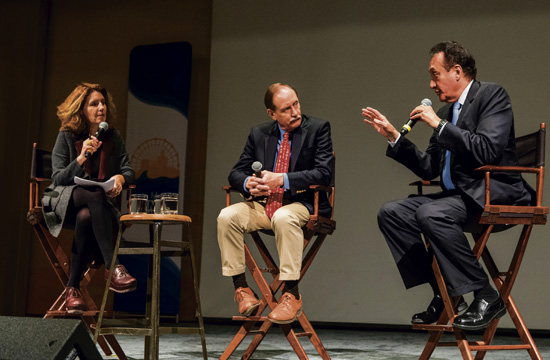 Civic leaders gathered Monday evening to reflect on the city’s present and future at the Santa Monica Chamber of Commerce’s annual State of the City event, jointly hosted by the City of Santa Monica.

More than 600 people packed the Soka Gokkai International Auditorium to hear from a wide range of local and national leaders.

Santa Monica-based Hulu received the Economic Excellence Award for its extraordinary growth and Breeze Bike Share partnership with the City.

The evening was capped off with KCRW’s Frances Anderton, host of the DNA Design and Architecture show, moderating a discussion between Secretary Cisneros and City Manager Cole.

Mayor Winterer debuted a video highlighting the City’s 2016 accomplishments in the areas of sustainability, public safety, digital access and wellbeing.

City Manager Cole focused on specific achievements and the City Council’s plans for 2017 but also called on Santa Monicans to recommit themselves to ending homelessness, which he called the great moral problem of our time.

“It was a clear choice for us to choose Santa Monica because it’s the intersection of entertainment and technology,” said Hulu SVP of Talent and Organization Jim O’Gorman, discussing his company’s decision to grow its presence here. His company is approaching 1,000 employees (or “Hulu-gans”) and 240,000 square feet of office space in Santa Monica.

Chamber President Rosen outlined the policy areas where her organization continues to fight for businesses, including on minimum wage implementation and the jobs-housing imbalance. She assured her members, “We will never shy away from making common-sense policy recommendations that will continue to allow Santa Monica’s economy to thrive and sustain the high quality of living we all value.”

Secretary Cisneros explored the trajectory of cities, from his public and now private sector perspective, with a special focus on housing and civic discourse.