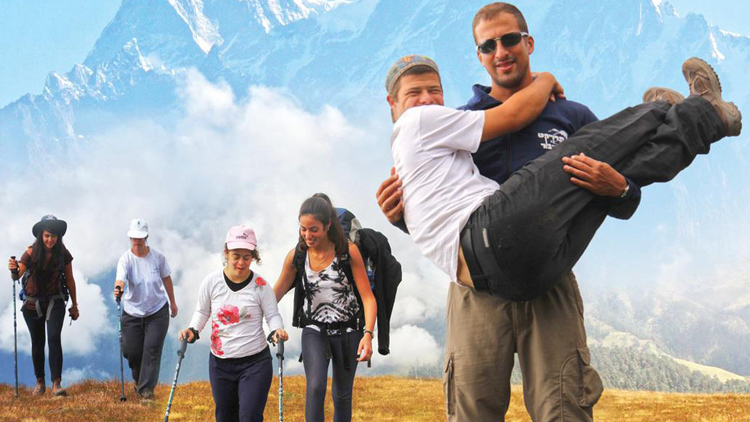 I just spent five days attending the Santa Barbara Film Festival and for the most part, the features, animated shorts, and documentaries were quite professional and compelling. That said, “My Hero Brother,” a documentary that was particularly outstanding, told the remarkable and inspiring story about a group of Down syndrome young men and women who go on a two-week trek through the Himalayas with their non-Down syndrome siblings. “My Hero Brother” won the Best Documentary Film Award and the Audience Choice Award at the festival, as well as awards in Israel.

Brilliantly directed by Israeli filmmaker Yonatan Nir, the genesis of the project began with co-producer Enosh Cassel, who eventually initiated the concept. He wanted to get closer to his brother Hannan, who has Down syndrome, and decided to take him on a journey to Nepal. On his return to Israel, he was contacted by other families with Down syndrome siblings who wanted to have the same experience. Eventually, plans were formulated for a group of siblings – Down and their non-Down brother or sister – to embark on a two-week trek through the Himalayas. That unbelievable experience became this extraordinary film.

Under these physically demanding circumstances, even a “normal” person would have a challenge traversing some of the really difficult trails. There were dramatic special moments such as when the adorable Tzlil said she couldn’t go on any further because her legs hurt. Her sister Shaked was patient and understanding and after a comforting discussion, she agreed to continue, but riding a horse instead of walking. Smiles all around. Another poignant scene was when one of the Down young men started to cry saying that he wanted his mommy or daddy. He was lovingly consoled and eventually agreed to rejoin the group. But, despite the occasional emotional or physical breakdowns, encouraged by their siblings, and the loving group, no one wanted to turn back and eventually, when they reached the summit, they emerged triumphantly, overcoming the physical and psychological challenges inherent in this disorder.

“My Hero Brother” is exquisitely shot by cinematographer Yoav Kleinman, augmented with a warm musical score by Ehud Banai, which includes the enchanting theme song: “It’s Time to Go.” The story takes you into the minds of these beautiful Down syndrome people and, through overcoming their physical and emotional challenges, illuminates the depth of their willpower, capacity to love, intelligence, and their deep caring for both their siblings and for each other. This is not a sad film. On the contrary, it’s incredibly uplifting, very funny at times, and a universal, heart-warming tribute to the determination of the human spirit.

Remarks by director, Yonatan Nir, sums up the intent of the film as follows:

“In the course of the film, I hope that the viewer will undergo an experience that will change his way of looking at the main characters – not as ill-fated people who have been given a chance to experience a brief release from suffering – but rather as human beings blessed with qualities many of us yearn to have, struggling with their limitations in an highly admirable and courageous way, with the ability to open the hearts of those around them and turn them into better human beings.

By admin February 21, 2017
in Life and Arts
Related Posts