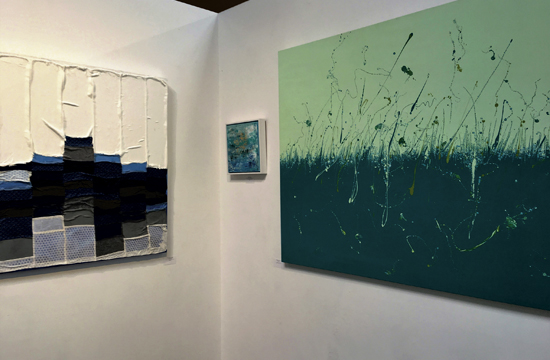 On Saturday, February 11, bG Gallery at Bergamot Station opened its newest exhibit titled “Water & Sky.” The show is part of a tradition now undertaken annually in which the gallery exhibits works of a certain theme or color, and then adds a sculptural component in mid-gallery showing.

“It’s one of my shows that I do where it transforms into an art installation,” said gallery owner and curator of the show Om Bleicher.

Last February, bG Gallery exhibited all gray works, and then added in a maze of sorts suspended within the gallery, producing the effect of the gray works being the walls of the maze. “Water & Sky,” as its name suggests, includes all predominantly-blue works of either water or the sky, some depicting one of these things literally, and others more abstractly.

“Gray didn’t seem right. It felt like we need some colors in these times,” said Bleicher.

On February 18, the installation component, titled “Sea of Art” will be added into the exhibition, and will showcase physical works suspended from the ceiling, giving them the impression of existing within the sky and ocean landscapes of the works already in the gallery.

The works themselves are curated from a number of artists from across the country, some of whom are affiliated with the gallery, but most of which are exhibiting in bG Gallery for the first time.

“The majority of the artists are first time exhibitors,” said Bleicher.

For more information about this and upcoming exhibits at bG Gallery, visit santamonica.bgartdealings.com.

By admin February 21, 2017
in Life and Arts
Related Posts