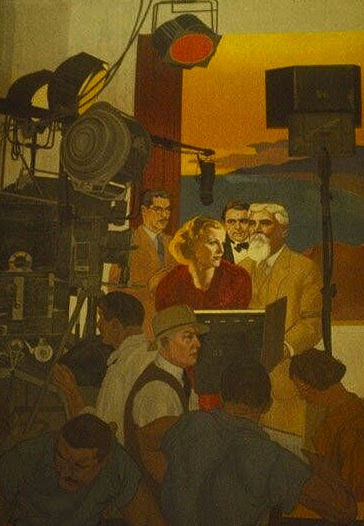 Join the Santa Monica Conservancy for an illustrated talk about the Macdonald-Wright murals in the Santa Monica Public Library. Our featured speakers this year include Roger Genser, Arts Commissioner, and Ruthann Lehrer, Conservancy Board member. The program also highlights our 2017 Preservation Award winners, exemplary projects and people who make important contributions to historic preservation in Santa Monica. Board elections and a year-in-review of the Conservancy’s work will also be included.

Raised in Santa Monica, Stanton Macdonald-Wright lived in Europe from 1909-1916, mingling with avant-garde artists, and co-founding a color abstraction style known as Synchronism. Best known as a muralist, Macdonald-Wright painted an extensive mural cycle portraying humanity’s accomplishments in the creative arts, science and technology covering the main reading room of our original Carnegie Library from 1934-1935.

The library murals, his first mural project, were painted on over 30 plywood panels positioned around doors, windows, archways and bookcases in its original setting. When the Carnegie library was demolished in the mid-1960s for a new and larger building, the murals were removed, reclaimed by the federal government, and stored at the Smithsonian for decades. Local arts activists and council members, long advocating for their return to Santa Monica, were finally successful, and the murals were returned and replaced in the current building in 2005. Macdonald-Wright also created the murals in City Hall’s lobby, as well as murals and a unique fire curtain at Barnum Hall. His work was featured in a major retrospective at LACMA in 2001.

Admission is free. Advance reservations are recommended byApril 1. Register online, email rsvp@smconservancy.org, or leave a message at (310) 496-3146. The library has limited street level (metered) and paid underground parking. Enter mid-block on 7th Street. The Library is also accessible by the Big Blue Bus.