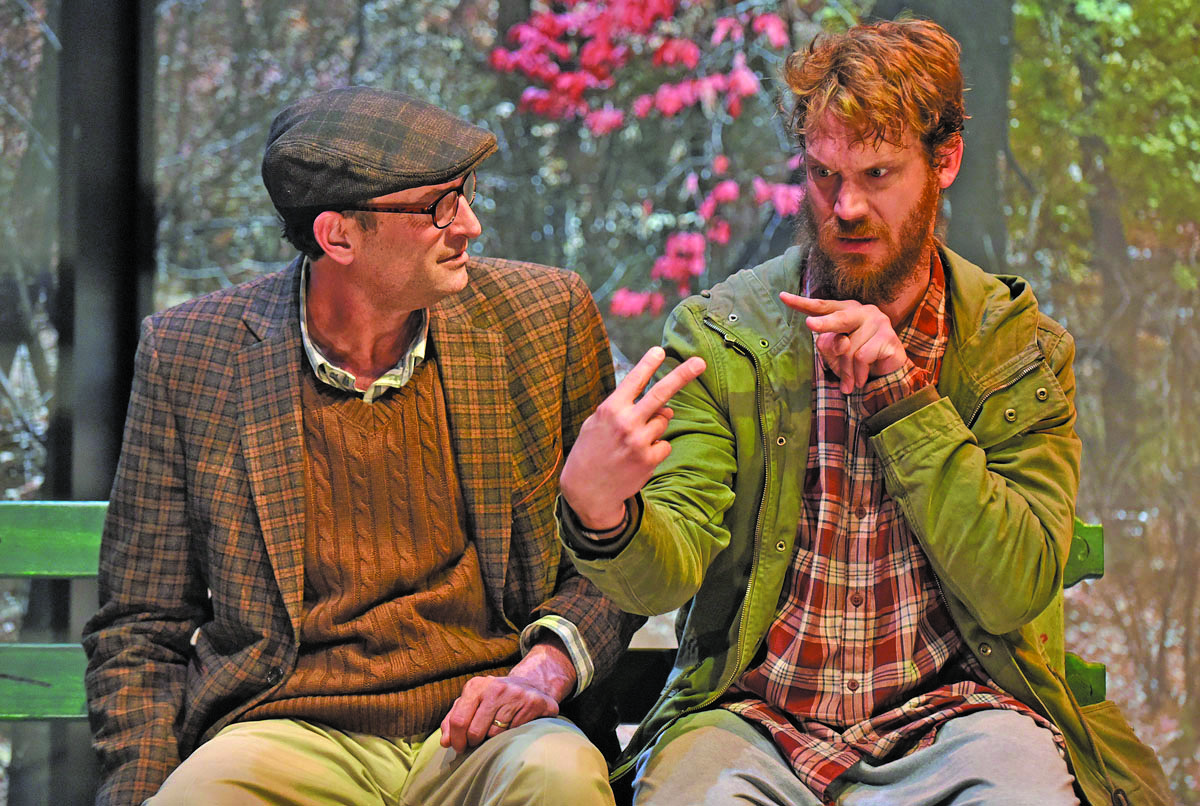 Before I launch into a review of Deaf West Theatre’s production of Edward Albee’s “At Home at the Zoo,” I’d like to say a few words about Edward Albee, considered one of American’s preeminent playwrights and the genre of the Theatre of the Absurd, into which his body of work falls.

The classification of Theatre of the Absurd grew out of works by five playwrights, which include Jean Genet, (“The Balcony,”) Samuel Beckett, (“Waiting for Godot” and “Endgame,”) Arthur Adamov, (“Le Professeur Taranne,”) Harold Pinter, (“The Birthday Party,” and “The Dumb Waiter,”) and Eugène Ionesco (“Rhinoceros.”)

This elite group of writers were heavily influenced by an essay written in 1942 by Existentialist philosopher Albert Camus entitled “The Myth of Sisyphus,” which highlighted the absurdity and contradictions inherent in the human condition. Their work transcended realism and was labeled “Theatre of the Absurd,” and reflected the breakdown of a coherent, interconnected moral universe. Their collective view is certainly more relevant than ever in view of the current political circus in Washington.

Now to the multiple award-winning playwright: Edward Albee is considered one of the greatest American playwrights. He won three Pulitzer Prizes for “A Delicate Balance,” “Seascape” and “Three Tall Women.” Although it did not win a Pulitzer, perhaps his most well-known play is the 20th century masterpiece “Who’s Afraid of Virginia Woolf?” – a scathing surgical bloodbath into an extremely dysfunctional marriage. Some of his other memorable works include, “The Death of Bessie Smith,” “The Goat, or Who Is Sylvia?” “The Lady from Dubuque,” “Knock! Knock! Who’s There!?” “Lolita,” “The Man Who Had Three Arms,” “The Sandbox,” and “The American Dream.”

“At Home at the Zoo,” on stage at the Wallis Annenberg Center for the Performing Arts, is presented in two acts – Act One is “Homelife,” a prequel to “Zoo Story,” which is performed in Act Two. This iconic play was Albee’s first major play, which he wrote in three weeks. It premiered off-Broadway with Beckett’s “Krapp’s Last Tape” earning him a permanent place in that elite fraternity of Theatre of the Absurd playwrights. “Homelife” is basically a two-character play – actually performed by four actors – two signing and two acting as the voices of the signing actors. Peter played by Troy Kotsur and his wife Ann, played by Amber Zion, are apparently a happily married couple living the good life in a tony part of Manhattan. They have two daughters, two kittens, and a couple of parakeets. Peter is a very successful executive in a publishing company and has provided a rich lifestyle for his family. On the surface all seems idyllic but in short order, Albee begins to deconstruct this seemingly happy marriage, smashing through the exterior to find the cracks in their contentment. Ann systematically begins to quietly attack the heart of the marriage – from his taking her for granted to the lack of attention when she tries to talk to him, to their humdrum sex life. She confuses him with stream-of-consciousness ramblings, ranging from the pros and cons of hacking off one’s breasts to discussing her mother’s love affair. Peter is bewildered at everything she says, including her desire to have some spice in their sex lives. She longs for some excitement – even a little violence in their lovemaking. “You are good at making love, but not at fu#*#g.” She wants a more primitive approach and wants him to get in touch with their primal instincts. She ruminates “You don’t love me the way I want you to.” He confesses that he is quite frightened of his animal instincts as he once hurt a girl sexually when he was in college. He put that part of himself away, but let’s remember that adage, “Never wake a sleeping tiger.” Peter listens to Ann but is obsessed with the fact that he thinks his foreskin is growing back, leading to a conversation about the pros and cons of circumcision. After rolling around on the couch in a poorly simulated “violent” sex, he goes back to reading the galleys on a new, but boring, book and she retreats back to the kitchen to cook up some spinach, both of them returning to living their lives of quiet desperation, which Albee’s writing so beautifully nails.

Under the uneven direction of Coy Middlebrook, Act One takes place in Ann and Peter’s living room. Ann’s dialogue is spoken by a bland Paige Lindsey White, who doesn’t capture Ann’s various emotions, while Jake Eberle does a decent job as Peter’s voice. The actors doing the voices are standing slightly stage right, behind what could pass for bars, simulating a kind of zoo effect. Unfortunately, this act lacked the kind of energy and magic we saw in the Deaf West Theatre’s production of “Spring Awakening,” which garnered beautiful reviews that resulted in a Broadway production.

Act Two is “The Zoo Story” and the acting, to a lesser extent, almost matches the energy and excitement of “Spring Awakening.” I suspect part of that is because all four actors are on stage at the same time so that we can see the part being played simultaneously by both the signing and hearing actors. The action takes place on a park bench in New York’s Central Park recreated through a splendid fall setting by Karyl Newman, which makes up for the most uninteresting set in Act 1, which in no way suggests the upper middle class lifestyle of Ann and Peter. Following the confrontational nature of the conversation with Ann in Act One, Peter goes off to the park to sit on his favorite bench. There he meets Jerry, a vagrant type individual who seems hungry for interaction with another human being. In short order, Jerry, an explosive character with multiple mercurial emotional transitions, is rivetingly played by a controlled performance from Russell Harvard, aided and abetted through Jeff Alan-Lee’s voice, who’s emotional involvement with the character was palpable. They merge as one, doubling the energy and emotions, which was so lacking in Act One. At first Peter is reluctant to be engaged, but Jerry peak’s his curiosity and before long, he does almost a monologue on myriad subjects, ranging from descriptions of the people who live in the same brownstone – from his relationship with the landlady and her vicious dog who he hated and loved at the same time, to the lady on the third floor, who cries constantly. He talks at length about trying to win over the landlady’s dog with hamburgers but confesses that he gave up and tried to kill the dog. He asks Peter a lot of very personal questions which he’s reluctant to answer at first but eventually capitulates and shares his story. Contrasting their lifestyles, Jerry describes his meager existence naming his sparse possessions which consists of a couple of empty picture frames, a hot plate, two spoons, a cup and saucer, one drinking glass, and a collection of pornographic playing cards. The comparison of their life styles is stark. Jerry also rattles off a list of dead relatives, including his parents and his favorite aunt. He confesses that he had homosexual experiences and that he can love a woman for about an hour and ponders, “Why have we created love in the first place?” Peter, although not fully understanding the rants, has been listening intently as Peter spouts such phrases as “Kindness and cruelty” or “What is gained is lost.” After rambling on and on, Jerry asks his new friend if he would like to know why he planned on going to the zoo. “I went to the zoo to see how people and animals co-exist.” He wanted to see children and balloon sellers. But, our esteemed playwright had no intention of making this a “Sunday in the Park With George,” but more a Sunday in the park with an unhinged man meeting a seemingly “hinged,” gentle man who is content with the life he is living. But no. – that is not what happens. It’s about here that Albee takes a dramatic fork in the road and quite unexpectedly Jerry turns very dark and begins to argue with Peter. Jerry makes fun of Peter’s dreary life and before long, hits him on the arm demanding that he move away from him on the bench. Taken aback, Peter keeps moving until he reaches the edge of the bench saying, “I can’t move any further.” It’s under these circumstances, when Peter is being bullied into giving up his favorite bench, that the base, smothered violent tendencies lurking beneath the surface, rears its ugly head. He yells back saying he’s not going to give up his bench at which point Jerry produces a knife and a violent struggle ensues. So, in a flash, Peter goes from a mild-mannered, rich publishing executive, to a man in a life and death fight, which he could have avoided by, yes, simply giving up the bench and going home to his comfy life. Albee makes a point that under the right circumstances, a controlled, normal exterior could mask a violent streak waiting to be unleashed especially when it involves a territorial imperative. What struck me in particular, is Albee’s use of the dog, who survived being poisoned, as a metaphor for how we engage with each other in life. We love. We hate. We destroy. We repent. We are redeemed. There’s a lot to ponder but heck, that’s what makes for a great evening of theatre and, despite the weakness of “Homelife,” “The Zoo Story” is just the play to stimulate your imagination and perhaps question what’s around you.

By Staff Writer March 22, 2017
in Life and Arts
Related Posts