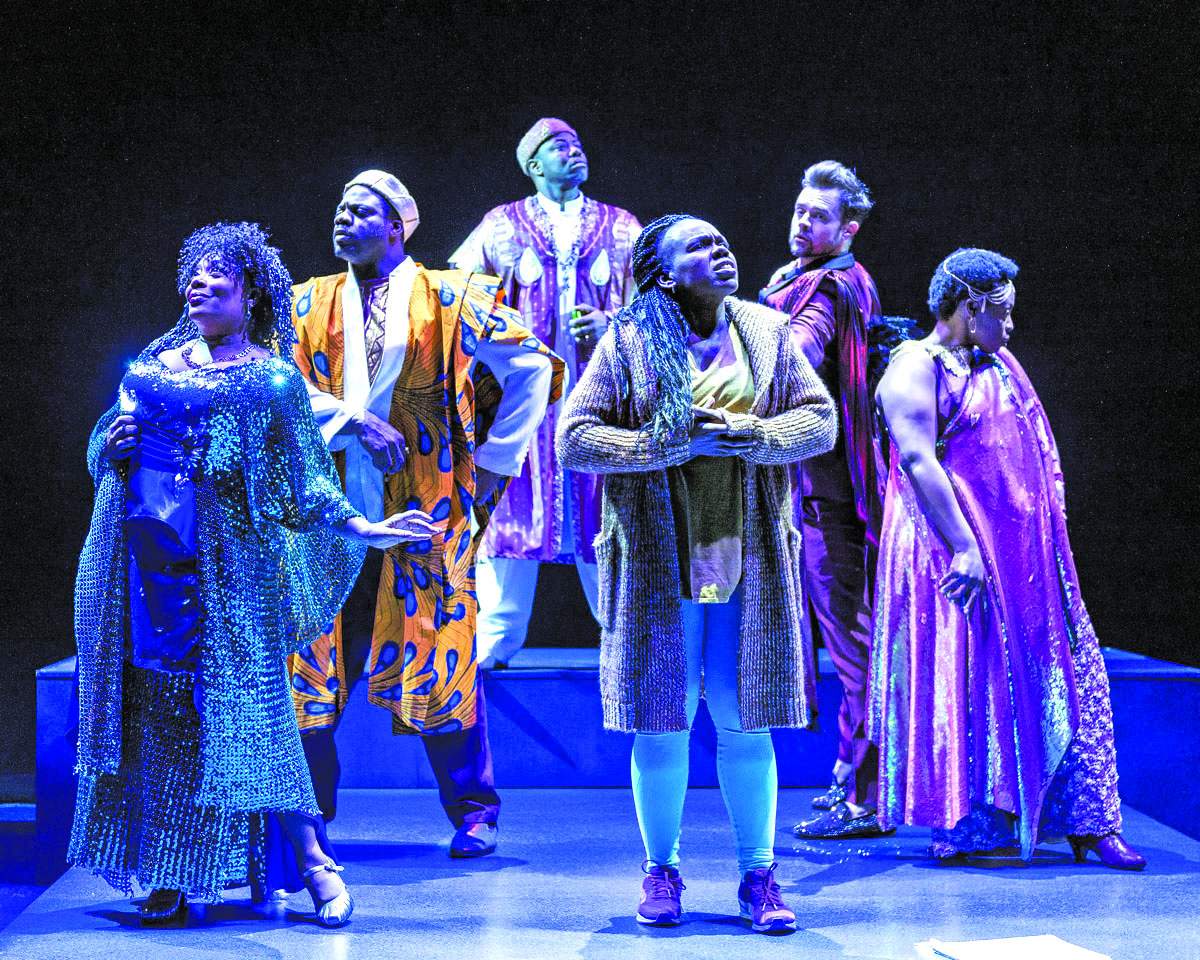 There’s an old show biz’ axiom that says, “If it ain’t on the page – it ain’t on the stage.” Each page of “Good Grief,” in its world premiere at the Kirk Douglas Theatre, is an extraordinarily well-written play by Ngozi Anyanwu and is brought to life by an incredibly talented ensemble under the sharp direction of Patricia McGregor.

Almost reminiscent in some ways of the feel of Thornton Wilder’s “Our Town,” the storyline revolves around Nkechi, played by the gifted writer, whose superb acting matches her poetic writing. Her friend since grammar school, MJG, very well played by Wade Allain-Marcus, has recently been killed in a car crash, which catapults her into a search of how to deal with her grief. This is not a linear story as it moves back and forth in time to when they were children spending time together in his room. They talked. They laughed. They teased each other. As they grew older, their conversations became more esoteric exploring the complexities of life. Having a crush on him forever, there’s a delicious scene where she wants him to give her the first kiss and with some physical manipulation, they finally succeed in that magical moment that most of us can remember – that first delicious, innocent kiss. Being buddies, she often spends the night in his room and one night is awakened by let’s say an expression of his extended manhood. On her realization of what was about to happen, she declares: “I don’t want to lose my virginity in my sleep.” Adding, “Can’t I even get a candle or a rose?” Anyanwu delivers many of her comedic lines in a finely crafted deadpan expression adding to the joy of the moment. In one of their long conversations, her friend complains that he doesn’t have a father, to which she immediately says: “You can have mine.”

Her flamboyant Nigerian father or “papa” is wonderfully played by Dayo Ade whose explosive energy fills the stage. He tries to counsel his daughter out of her grief and encourages her to go back to school. Her mom, NeNe, lovingly played by Omozé Idehenre, behaves both as her mother and a shrink. Papa and mom have one hilariously funny scene together where he wants to make love. In another scene between mother and daughter, following the death of MJG, NeNe says they should pay a visit to his mom, very well played by bigger than life Carla Renata, saying, “We should bring a cake,” to which her daughter responds: “I didn’t know you baked.” “I don’t. I go to Whole Foods.” Nkechi keeps taking herself back in time and recreates a memorable moment when she and her brother “Bro,” convincingly played by Marcus Henderson, roll around the floor in a wrestling match. Whenever she feels as though something different should have come out of a specific moment, she says, “redo.” Another moment that she wished she could do over, is an encounter with Mark Jude Sullivan’s well fleshed out character of JD, an old school chum with whom she has sex for the very first time. He freaks out when he learns she’s a virgin, but she consoles him saying it’s ok, but clearly wishes that she had given up her virginity to the love of her life. At one point, after doing the “deed,” she stares at his head and says, “Your ears are so clean.”

In a moment where she is trying to deal with her grief, she sums up her feelings with: “I can’t breathe I’m so lonely at times,” a beautiful graphic description of the physical manifestation of loss. Another poignant moment is when she says “How are you everywhere and no where.”

What could have been a mundane story about grief, and reaching into the past to achieve some meaning to the tragedy, Anyanwu has incorporated not only sharp wit, but also highly theatrical elements using archetypes from both Greek mythology and names of famous constellations such as Orion’s Belt brought to life by members of this highly professional troupe of actors. Wearing spectacular costumes, designed by Karen Perry, their sporadic presence on stage was like watching a kaleidoscope of shimmering colors exploding before your eyes. This gifted playwright deftly orchestrates moving back and forth in time, as well as moving in and out of reality,

a very delicate balance, which she so ably navigates. Lest you think this is a sad play, on the contrary, the playwright has peppered the script with an unending array of hilariously funny lines, which the opening night audience fully enjoyed – so much so that some of the ensuing lines were lost.

Augmenting the splendid writing, crafted direction, and superb acting, is the excellent production team beginning with the creative set design by Stephanie Kerley Schwartz, lighting design by Pablo Santiago, sound design by Adam Phalen, with music composed by Kathryn Bostic. All elements of “Good Grief” coalesced into a stunning evening of theatre.