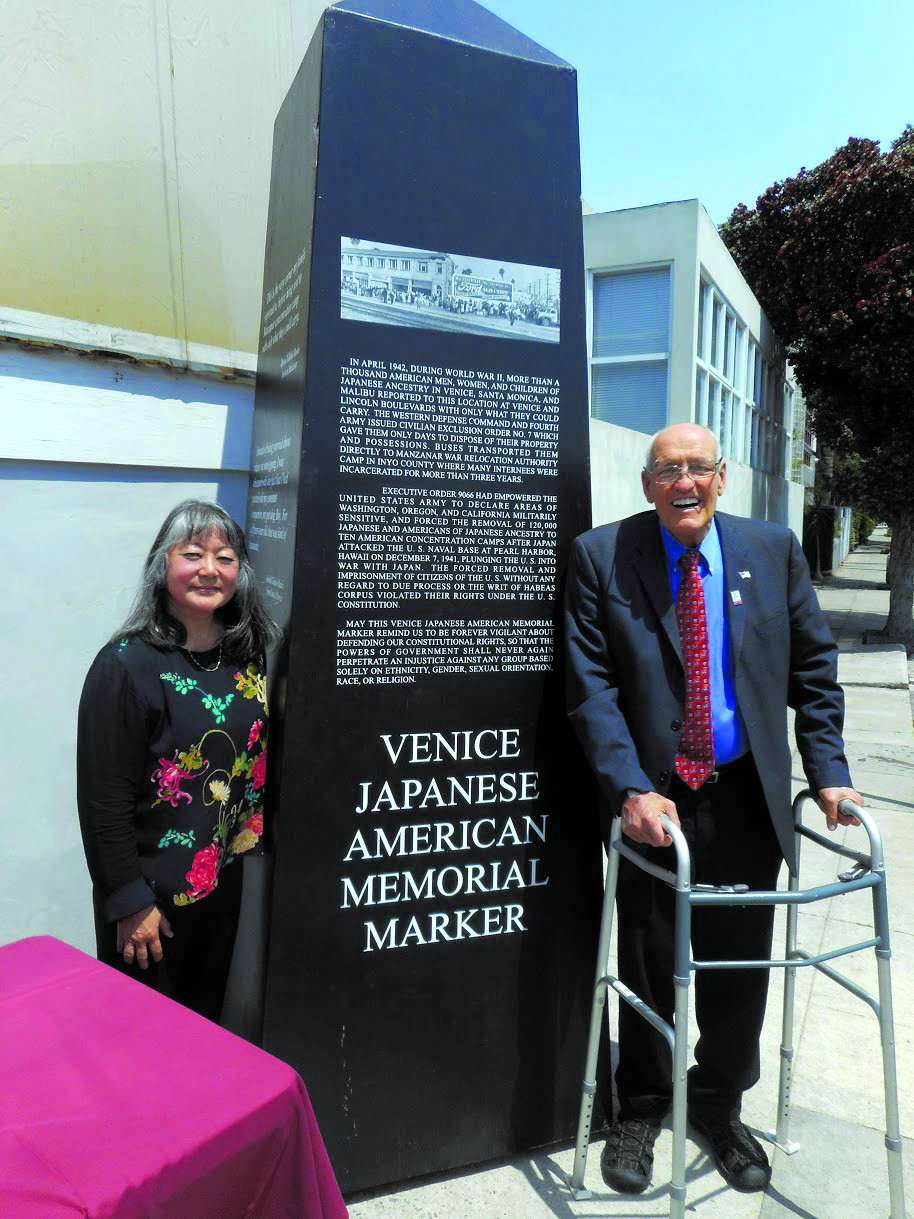 The Venice Japanese American Memorial Monument (VJAMM) Committee plans to hold a dedication ceremony for the VJAMM on Thursday, April 27, 2017. The ceremony will take place at 10 a.m. on the northwest corner of Venice and Lincoln Boulevards.

“Over several days in April 1942, about 1,000 people of Japanese ancestry from Venice, Santa Monica, and Malibu reported to this corner, literally, with only what they could carry,” explained Phyllis Hayashibara of the VJAMM Committee.

The “Civilian Exclusion Order” gave Japanese Americans “only days to register their families, dispose of their property and possessions; their businesses, their vehicles, and their pets,” said Hayashibara.

Hundreds of Japanese Americans gathered in Venice following the order. People lined up along Venice Boulevard waiting for buses that would take them directly to what became the War Relocation Authority internment camp called Manzanar, deep in Inyo County off Highway 395. At the time, they did not know their destination, that the bus ride would take four hours, or that many of them would spend more than three years during World War II imprisoned.

The weight of the journey is somewhat reflected in the new monument. By the time the 14,000-pound VJAMM arrives in Venice it will have traveled thousands of miles; from India to Arvin, California, for engraving, Venice will be its final destination.

The dedication of the VJAMM will also mark the 75th anniversary of President Franklin D. Roosevelt’s signing Executive Order 9066 on February 19, 1942. EO 9066 followed Japan’s December 7, 1941 bombing of a U.S. naval base in Hawaii, and led to the detainment of people living in the U.S. whose only offense was that they “looked like the enemy.”

The San Francisco News reported on April 30, 1942, “The evacuation was coast-wide, covering zones from Alaska to Arizona. Approximately 100,000 Japanese were living in the Pacific defense zone when the exclusions began. Of these, possibly 5,000 to 8,000 moved out voluntarily. In addition, Japanese formed the majority of the dangerous aliens seized in the area by the FBI, a total of under 5,000 on the Pacific Coast.”

Brian Tadashi Maeda was born in Manzanar. Both he and his brother, Arnold Tadao Maeda will have their words engraved onto one side of the monument.

“My family reported to this very corner, before being sent to Manzanar concentration camp with only what they could carry. They, and many other families lost everything: their homes, their businesses, their liberties,” he said.

Mae Kageyama Kakehashi will also have her words immortalized in granite. Before being sent to Manzanar, Kakehashi’s family lived in Venice, and she studied at Venice High School.

“When the camp closed, we were given $25 and told to leave. But we had nothing when we left camp – no home, no jobs, no prospects. It was very hard on all of us,” she said.

While the solid black granite obelisk will forever mark a dark corner of Venice Beach history, Hayashibara is optimistic the VJAMM will act as a reminder; safeguarding future generations from injustice.

“The VJAMM seeks to remind the living to be forever vigilant about defending our constitutional rights. The powers of government must never again perpetrate an injustice against any group based solely on ethnicity, gender, sexual orientation, race, or religion,” said Hayashibara.

Community activist, and Manzanar Pilgrimage pioneer, Warren Furutani, has confirmed as the keynote speaker at the monument’s dedication ceremony. After the VJAMM dedication, Hama Sushi in Venice will hold the sixth annual VJAMM fundraiser. Owner, Esther Chaing will donate 100 percent of all pre-ordered bento lunch profits and 10 percent of all dinner sales on the day to the VJAMM Committee. The Committee will continue to raise funds for the monument’s ongoing maintenance.

Engraved on the front side of the VJAMM will be: “Executive Order 9066 empowered the U.S. Army to declare areas of Washington, Oregon, and California militarily sensitive. EO 9066 forced the removal of 120,000 Japanese and American citizens of Japanese ancestry from the west coast to be imprisoned in temporary assembly centers at fairgrounds and racetracks. Months later, they were taken to ten American concentration camps under the War Relocation Authority. This forced removal and imprisonment, without any regard to due process or the writ of habeas corpus, violated their rights under the U.S. Constitution.”

Last month, President Donald Trump’s Executive Order 13769 tried to place restrictions on immigration and refugee entry into the United States. Federal Courts quickly struck down the move while demonstrations took place across the country. That is why Hayashibara believes, “today, more than ever, the significance of the Venice Japanese American Memorial Monument cannot be emphasized enough.”