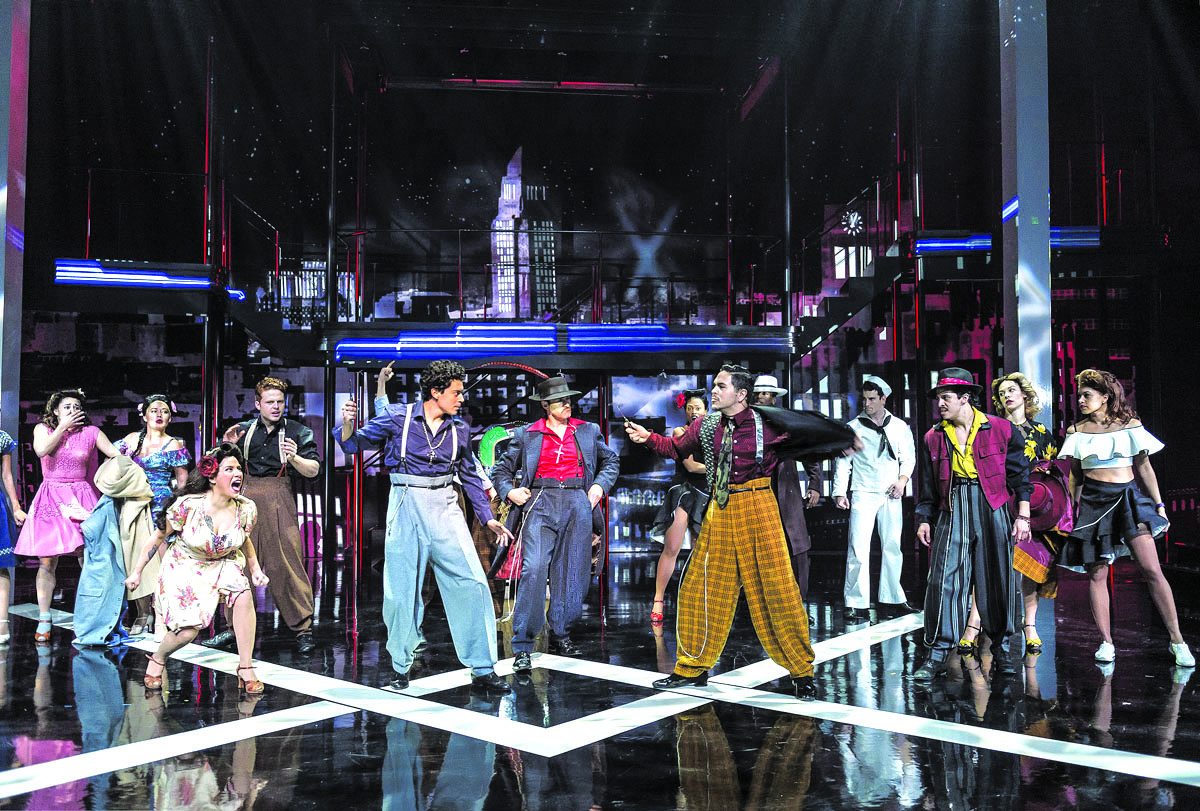 Setting the time and place of a story by using newspaper headlines definitely catapulted us back to that moment in time when the historic events depicted in Luis Valdez’s “Zoot Suit” transpired. As a backdrop for this startling revival on stage at the Mark Taper Forum, a giant replica of the August 2, 1942 evening edition of the Los Angeles Herald Express screamed such headlines as, “Leslie Howard Lost at Sea,” “Nazis Begin Battle at Kiev,” and “Grand Jury to Act in Zoot Suit War.” Headlines from subsequent editions included, “Sleepy Lagoon Fight,” and “U.S. Marines Land in Guadalcanal.”

Brilliantly written and directed by Luis Valdez, “Zoot Suit,” the musical drama was originally commissioned and developed under the guidance of the late Gordon Davidson, founding Artistic Director of the Center Theatre Group, and illuminated the racism against Mexicans. It ran for almost a year from August to October 1978. Subsequently, the production went to New York becoming the first Chicano play to hit Broadway and eventually was turned into a film.

Almost 40 years have passed since its initial staging and once again, Luis Valdez has

resurrected this historic theatre piece. With a cast of 25 performers, he has theatrically recreated the events surrounding the infamous 1942 Sleepy Lagoon murder and subsequent mockery of a trial of 25 members of the 38th Street Gang. The “uniform” of the day was zoot suits, a popular fashion dominated by Chicanos, which was in sharp contrast to the fashion worn by white people. With its high waist, wide-legs, tightly cuffed trousers pegged at the ankle, topped off with a long coat with side lapels, padded shoulders, a plumed hat, and slicked back hair, the look became a lightning rod for discrimination and violence.

The lead character of El Pachuco, originally created by Edward James Olmos, who became an overnight sensation, is splendidly portrayed by Demian Bichir. His character is a one-man Greek chorus, always lurking about throughout the play. He is the voice of reason and gives dire warnings of the unfolding injustices, similar to the character of Cassandra, the daughter of Troy. Bichir delivers El Pachuco’s dialogue in a clipped, deep throaty, guttural sound, interspersed with Spanish lines, the meaning of which eluded parts of the audience. However, his highly stylized body language telegraphed the meaning without everyone understanding the words. He warns that, “The war is on the home front,” words that ring true with stark contemporary meaning.

The story line revolves around Henry Reyna, sensitively played by Matias Ponce. He and the other members of the 38th Street Gang go to a party during which a fight breaks out and, unbeknownst to Reina, who is planning to join the Navy the next day, a young man is murdered. Reyna and his innocent friends, often referred to as “baby gangsters,” head to the Sleepy Lagoon, a reservoir that serves as a swimming hole and doubles as a spot for young lovers. Subsequently, without any hard evidence, Reyna, along with the 22 members of the 38th Street Gang, are arrested based solely on their “look,” and are put on trial for the murder.

Attorney Brian Abraham, very well played by George Shearer, visits the boys in jail and tells them he was hired to represent them. At first, Reyna is suspicious of his motives, but is finally convinced that Abraham is representing them for the right reasons. Also into the mix comes Alice Bloomfield, a civil rights activist brought to life by Tiffany Dupont. The travesty of a trial begins. The incredibly racist Judge F.W. Charles, is chillingly played by Richard Steinmetz, who also plays a prison guard and police lieutenant Edwards. Abraham keeps citing that there is no hard evidence connecting these men to the murder, but every objection is overruled. The prosecutor does not pay attention to what the witnesses for the defense actually say, but restates their testimony twisting it to prove his case. It is truly agonizing to watch how the court allowed this manipulation. Abraham objects over and over to the judge’s rulings and is threatened with a contempt of court citation. A really chilling line is when the judge says, “Specific details are irrelevant.” The frustrated attorney gets the judge’s behavior into the record, declaring that he will be reporting him for misconduct under the Code of Conduct for United States Judges. It’s no surprise that

the jury comes back in short order, finding all the defendants guilty in first and second-degree murder. They are sentenced to life. Abraham visits the men in jail assuring them they are already working on an appeal. Henry’s response is frightening, “Once a Mexican goes in, (to jail) he never gets out.” Act I ends with El Pachuco coming on stage announcing, “A break so you can pee.”

Much of Act II consists of life in prison. Reyna strikes an officer and is thrown into solitary confinement for 90 days during which there is a particularly moving scene between he and El Pachuco. Meanwhile, the gang’s attorney is called away to serve in the Army. However, he gives them reassurances that many people, including Alice are working on their appeal and he’s positive that they will prevail. There is a joyous family reunion with Henry’s mother Dolores, appropriately played by Rose Portillo and Enrique his dad, also appropriately played by Daniel Valdez. They both have comedic moments such as dad’s objection to what his daughter Lupe (Stephani Candelaria) is wearing saying, “I don’t want my daughter looking like a puta,* or when momma says to her son “I can’t believe you’re going off to war. I almost wish you were going back to jail.” What about Henry Reyna’s love life? Will he marry Alice Bloomfield or his childhood girlfriend Della Barrios (Jeanine Mason.) Well.   You’ll have to find out for yourself.

If this play was presented under the last administration, it would have been a nostalgic look back at a turbulent time in Los Angeles when discrimination against young Latino men was openly practiced – both by civilians, the police, and the judiciary, as well as men in the military, who attacked anyone wearing a zoot suit, stripping off their clothing down to the underwear. This was recreated in a compelling scene with Henry’s brother Rudy, played by Andres Ortiz.   For this level of discrimination to exist today, would have been hard to imagine. However, with the state of our government at this point in time, the revival of “Zoot Suit” is more relevant than ever and serves as a strong wake-up call to the inequities of a government controlled by men who have lost sight of our Constitution and the words in our Pledge of Allegiance “.…with liberty and justice for all…”