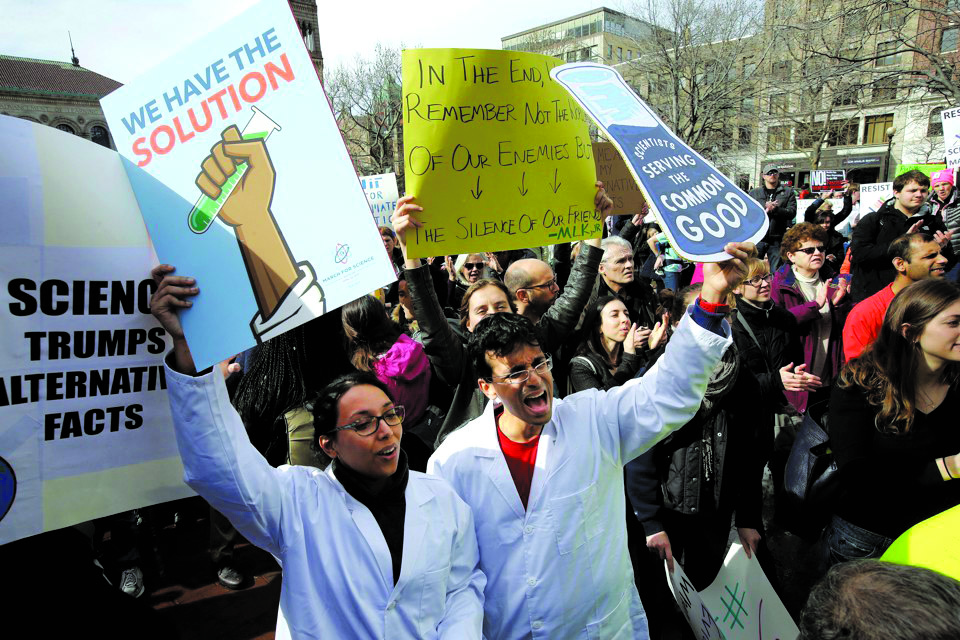 The Los Angeles March for Science is one of over 500 Science Marches taking place in the U.S. and around the world on Earth Day, Saturday April 22, 2017.

The organizers of the March write, “Science, scientists, and evidence-based policymaking are under attack. Budget cuts, censorship of researchers, disappearing data sets, and threats to dismantle government agencies harm us all, putting our health, food, air, water, climate, and jobs at risk.”

Agreeing with the concerns stated is Anton Bilchik, M.D. of the John Wayne Cancer Center in Santa Monica.

Dr. Bilchik, a renowned cancer researcher and surgical oncologist said, “My understanding is that there is a purposed 20 percent cut in funding for NIH (National Institute of Health) research. The consequences of that are massive. There will be fewer research studies and fewer clinical trials. It will slow the process of developing new treatments and new detection methods and surgical quality measures.

“The impact is on cancer centers, universities, training of new doctors and specialists and the long term inevitability of people not wanting to go into research because there will be no reasonable expectation of funding.

“One of the most exciting areas in cancer therapy is immunotherapy, over the past 5 years there has been enormous progress changing how we treat cancer – breakthroughs made possible by research supported by NIH.”

From medicine to sustainability, scientists in every field are concerned. Mark Gold, D.Env, is best known as the first Director of Heal the Bay (HTB.) He is currently Vice Chancellor of the Institute of the Environment and Sustainability at UCLA.

Gold spoke about being at the 25,000 person conference of the American Geophysical Union in San Francisco in December of 2016, remembering, “There was a palpable anxiety about the future of scientific research in the face of the denial of the importance and value of science by President Trump.

“The thought of science on the chopping block in Trump’s proposed budget is nothing less than horrifying,” Gold said.

Sarah Sikich is the current Vice President of HTB. She holds a master’s degree in environmental science and a bachelor’s in marine biology.

“We are at a tipping point for climate change and for water protection. With the Trump Administration questioning the importance of science and the reality of climate change we have to say it is irresponsible not to use science in the protection of our nation.

“HTB scientists’ research on the level of harmful bacteria present in the Santa Monica Bay and the frequency and severity of sicknesses for swimmers and surfers helped to lay the foundation for environmental laws and regulations that have dramatically improved the water quality of the Bay.

“As an environmental organization whose work is based on science HTB believes we have to be part of the Angeleno community coming together to let President Trump, all our elected leaders and the entire Federal Government know they must use science in governing.”

Joining in the protection of science and research is the Natural Resources Defense Council’s (NRDC) Water Director and Senior Attorney, Steve Fleishli.

“The new administration has expressed such disdain for science. There is a fundamental assail on science which threatens our work to understand and combat climate change and water quality.

“Fortunately we still have a system of checks and balances. Trump cannot rule by fiat. He can’t undo laws with a wave of a magic wand.

NRDC is in litigation against the EPA for illegally rescinding the rule regulating discharges of mercury – a neurotoxin that can harm the nervous system and on the refusal to ban the pesticide chlorpyrifos – linked to learning disabilities in children.

“I am confident we will prevail. While we are already moving against the Trump administration, the court process is slow and tremendous damage could be done in the interval.”

President Trump can’t tweet away facts. The facts are that climate change is real, world temperatures are rising, oceans are rising.