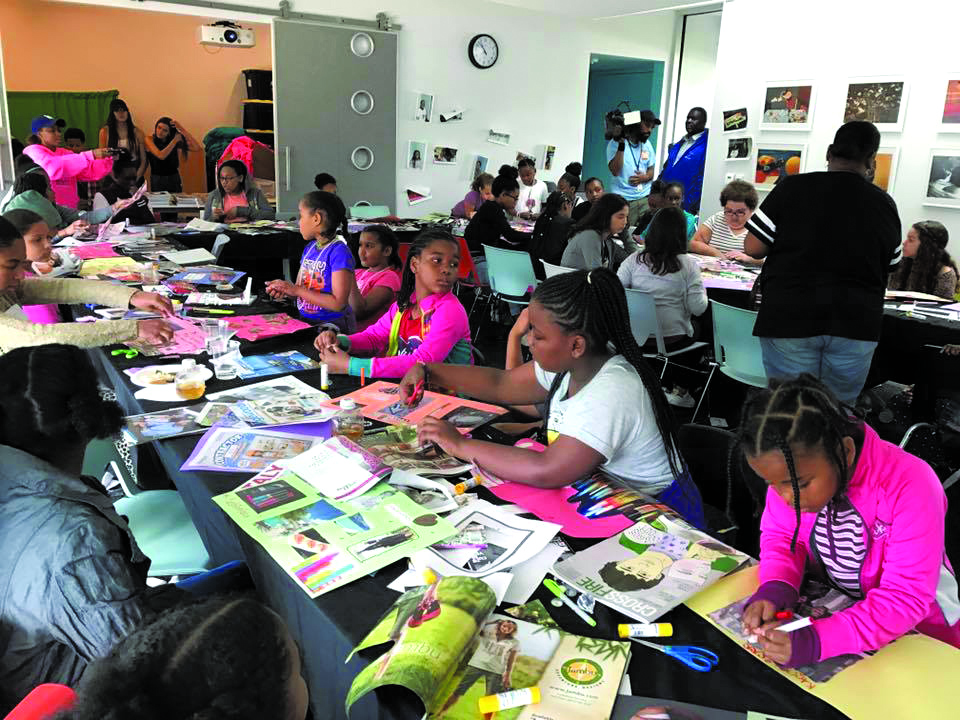 For two Santa Monica High School (Samohi) Juniors, Larissa Lim and Chloe Gottlieb, who traveled to the United Nations in New York Saturday, March 11, to attend the 61st annual session of the Commission on the Status of Women (CSW), the future is definitively female. Throughout the week-long leadership event, Lim and Gottlieb joined other student delegates to listen to speakers, participate in panels, and take part in other activities promoting women’s rights and gender equality.

The girls, also co-presidents of Samohi’s Girls Learn International (GLI) chapter, were two of 40 female students selected from a nationwide applicant pool of 600 GLI chapters. GLI, a sister organization of the Feminist Majority Foundation, primarily focuses on increasing access to education for women and girls around the world, and offers students the opportunity to attend the CSW each year.

This year, the CSW targeted women’s economic empowerment in the changing world of work as its priority theme, and the empowerment of indigenous women as a smaller focus. In addition to hearing speakers, the student delegates were organized into advocacy teams, each of which chose an individual Sustainable Development Goal (SDG) to tackle during the week. Lim’s group focused on sexual and reproductive health and education for refugee women and girls, while Gottlieb’s team chose the same topic in regards to immigrant women and girls.

“It was kind of a niche topic, but it was really cool to talk about it and get the word out,” Gottlieb said. “If you don’t have the words to describe something, people don’t know there’s a problem and don’t know that there’s something lacking.”

In order to implement change and spread awareness, Lim’s team created an Instagram campaign called “@rep4refs.” The students interviewed people throughout the week about the topic to post on the account, and plan to introduce the campaign to their respective high schools.

Gottlieb and Lim also attended the CSW’s second Youth Forum ever with other high school delegates to share the problems and opportunities in their areas of the country and abroad regarding the status of women.

Lim said the most powerful part of the experience was meeting and learning from people from backgrounds starkly different from her own. Additionally, she said she appreciated meeting individuals who had taken unexpected paths to get to the work they were doing.

“I met a lot of girls from New Jersey and Pennsylvania, actually, which was really cool because you learn how their environments shape who they are,” Lim said. “I also met this girl from Iowa, who goes to a far-right school, and she was bullied for being a feminist. She had one ally, a teacher, and the rest of the school was totally against her.”

Lim and Gottlieb were also able to meet girls their age from distant countries such as Nigeria, Uganda, Ethiopia, and Mozambique, and listen to several survivor stories of assault and trafficking. Both students said it was empowering and important to hear their experiences.

“I got to go to a side event that was held by France, and it was all about abortion rights universally,” Gottlieb said. “It was interesting to see their perspective on that versus the America-centered view that I’m used to, living in the states.”

Gottlieb said much of the conversation at the CSW was focused on navigating the new landscape for women’s rights due to President Trump’s administration and decisions.

“It felt really inspiring to see that it’s not going to be an issue that we don’t talk about or don’t try to fix,” Gottlieb said. “We’re going to work towards finding solutions no matter who’s in charge of the United States.”

For more information on GLI, head to: girlslearn.net.