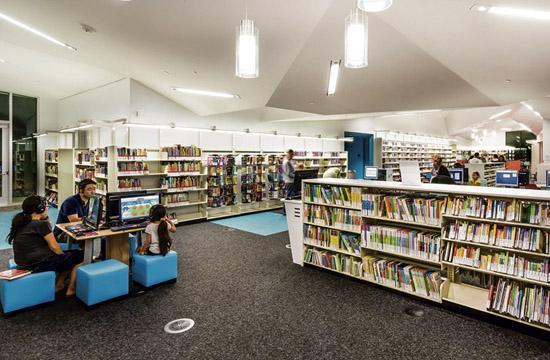 Santa Monica Public Library’s main branch hosted a free tech fair for older adults Saturday May 13, aimed at helping some of Santa Monica’s older residents improve their competency at using technology like smartphones or laptops. The event was organized by the Older Adult Task Force (OATF), which is a networking consortium of businesses dedicated to enhancing the quality of life of older adults all over the Westside. This was the second time the OATF held a tech fair, with its first in 2014.

“When we did the last one, people said that they wanted it on a regular basis,” said Ishara Bailis, who works with UCLA Health and oversees the OATF.

The event, which was attended by dozens throughout the day, included lectures on iPhone and Android features in the library’s auditorium, an interactive computer lab teaching things like photo editing and Google Drive, a “technology petting zoo” offering hands-on use of various technologies, and one-on-one coaching sessions for smartphones, tablets, e-readers and laptops. Bailis explained that at both 2014’s and this year’s event, the one-on-one coaching was most popular with participants.

“When I’ve walked up and down, people say that it’s great and that they got what they wanted,” said Bailis.

The assistance provided by the event’s volunteers is aimed at helping older adults access a wide range of technology competency; offering coaching and skills to complete beginners, as well as supplementary lessons for those who may already be using their smartphone, for example, but in a limited way and would like to increase its functionality.

Throughout the year, the library hosts computer workshops that are well-attended by the community, so Bailis explained the library was a natural choice of venue. The OATF doesn’t provide ongoing services, so this is not currently a regularly occurring event, alhough Bailis hopes it may turn into something with more regularity down the line.

For more information about programming at the Santa Monica Public Library, visit smpl.org.