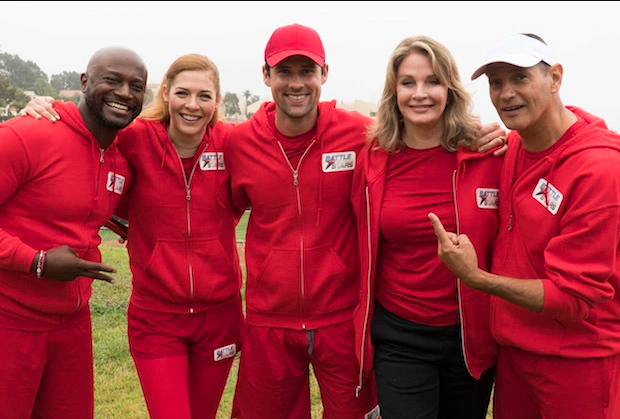 “Battle of the Network Stars” airs for the first time since 1988 at 9 p.m. Thursday evening on ABC, with a team of TV Kids, including “Facts of Life” star Kim Fields, facing actors from past and present ABC comedies.

MMA champion and Olympic judo bronze medalist Ronda Rousey and retired NFL outside linebacker and defensive end DeMarcus Ware will be team captains in each episode.

ESPN’s Mike Greenberg and Joe Tessitore will be the hosts, a role filled by the late Howard Cosell in the original version.

“This is something that I think is just pure fun that anyone who gets into the right frame of mind will be able to enjoy whether they’re 10 or whether they’re 80,” Greenberg said in an interview during a break in production at Pepperdine University, where the original was also conducted.

Tessitore called “Battle of the Network Stars” “the comfort food of American television and we don’t have a lot of that right now.”

“In the day and age that we’re in in our society and what’s going on geopolitically watching TV with your family can often be a challenge,” Tessitore said. “Here’s something that crosses generations, it involves sports and competition and fun and entertainment and seeing celebrities.”

In her role as a team captain, Rousey said she “plagiarized and repeated” advice she received from her coaches over the years.

“I’ve told them pretty much just to try as hard as you possibly can and not to think about how tired and uncomfortable you’re going to be afterward,” said Rousey, who captained the TV Kids team in Thursday evening’s episode.

“A couple of them were worried about getting tired out or getting nauseated or dizzy or a headache from trying too hard. One thing I just tried to get across to them was trying as hard as you could do is worth a little nausea and a headache and being a little dizzy.

You don’t avoid working hard so you can avoid feeling uncomfortable. You work hard and you deal with the discomfort when it comes.”

Rousey said her presence in “Battle of the Network Stars” will give the public the chance to see another side of her.

“When people usually see me it’s in the most serious situation in my life,” Rousey said. “People see me when I’m about to risk everything in my life and my own well-being.

I’m not always in that situation all day. I feel like I get to be my whole self here. I don’t have to protect myself by only being the fighter here.”

Ware said a key was building the actors’ confidence.

“It’s all about getting them to try it and once they see that, confidence is built (and) they’ll do it,” said Ware, who retired in March after playing 12 seasons in the NFL and being a nine-time Pro Bowl selection.

Fields and Whelchel are among the 20 stars participating in the 10- episode reboot who also participated in the original, which ran from 1976-88, often airing twice a year.

Departures from the original include having teams based on characters the participants portrayed instead of the networks their shows aired on and having stars from past series.

With participants ranging from a star of a series that premiered in 1969 (“The Brady Bunch’s” Barry Williams) to the present, “a lot of cross- generational advice” was shared, executive producer Andrew Glassman said.

“The best part was getting to meet other TV kids and TV parents from such iconic shows,” said Krista Marie Yu, who played Stanford-bound teenager Molly Park on the recently canceled ABC comedy “Dr. Ken” and was part of another team of TV Kids facing a team of TV Moms & Dads in an episode that will air later in the season.

“Everyone was friendly and enthusiastic, it made for an extra fun day.”

To Gabrielle Carteris, competing on “Battle of the Network Stars” was “her victory dance” after being injured while filming a made-for-television movie.

“It was challenging and exciting for me to participate in a way I thought would never be possible,” said Carteris, who was part of a team of prime-time soap opera stars. “That was my win.”

Carteris, best known for playing high school newspaper editor Andrea Zuckerman from 1990-95 on Fox’s “Beverly Hills, 90210,” said she “never laughed so hard,” as she did when competing on “Battle of the Network Stars.”

Thomas Calabro, who played Dr. Michael Mancini on Fox’s “Melrose Place” and was part of team of actors who portrayed doctors, said that  “it’s always surprising to find out what people who you think of as past their prime and you realize they’re doing such interesting things related to show business in some way.

They might not have the fame or fortune they once had, but it doesn’t seem to matter,” Calabro said. “They still for the most part seem like pretty happy people and I love that.”

The rebooted version includes some events for the original — the obstacle course, tug of war, archery and a kayak relay — is “streamlined” and “more focused on the action,” than the original, Glassman told City News Service.

“It’s going to come at you much faster than the original did,” Glassman said.

“Battle of the Network Stars” is returning in part because Glassman missed its “positive energy, great storytelling, the spirit of the beach party that you really wanted to be invited to,” he said.

ABC executives told Glassman they “missed the show too,” especially “the spirit,” he said.

“The screen is filled with positive energy,” said Glassman, who is also an executive producer of the NBC prime-time game show “The Wall.” “Seeing stars you love in a different light is inherently compelling.”

Glassman said he received the same four-word reaction from actors he approached to be on “Battle of the Network Stars,” colleagues and friends, “I loved that show.”

The taping of the episodes made Glassman feel like he was “standing in a time machine in one sense and also watching something very current in another sense.”

“Battle of the Network Stars” is like “being at summer camp with famous people that you really loved on television over the years,” Glassman said.

In another nod to ABC’s past, Greenberg and Tessitore wear replicas of the yellow blazers worn by the network’s sportscasters during its sports division’s extended heyday from the 1960s though the 1980s.

“When I walked into the trailer and the jacket was hanging there, I almost fell down,” Greenberg said. “We are now known on the set as `The Jackets.”‘

Tessitore said there were times the action in “Battle of the Network Stars” was more exciting than the college football and basketball games he regularly calls for ESPN.

“There are many times I’m at Rupp Arena broadcasting a prime-time Kentucky game and there are 23,000 fans there and it’s a horrible event to call (when) it’s a blowout,” Tessitore said.

“You get a close competition here, I’m thrilled. Sports is sports. Give me good competition and I like to call it.”

Said Greenberg: “It’s been fun to hear it in his voice. Kim Fields … coming down the stretch of the obstacle course and Joe was calling it like the Belmont Stakes and a chance at the Triple Crown.”