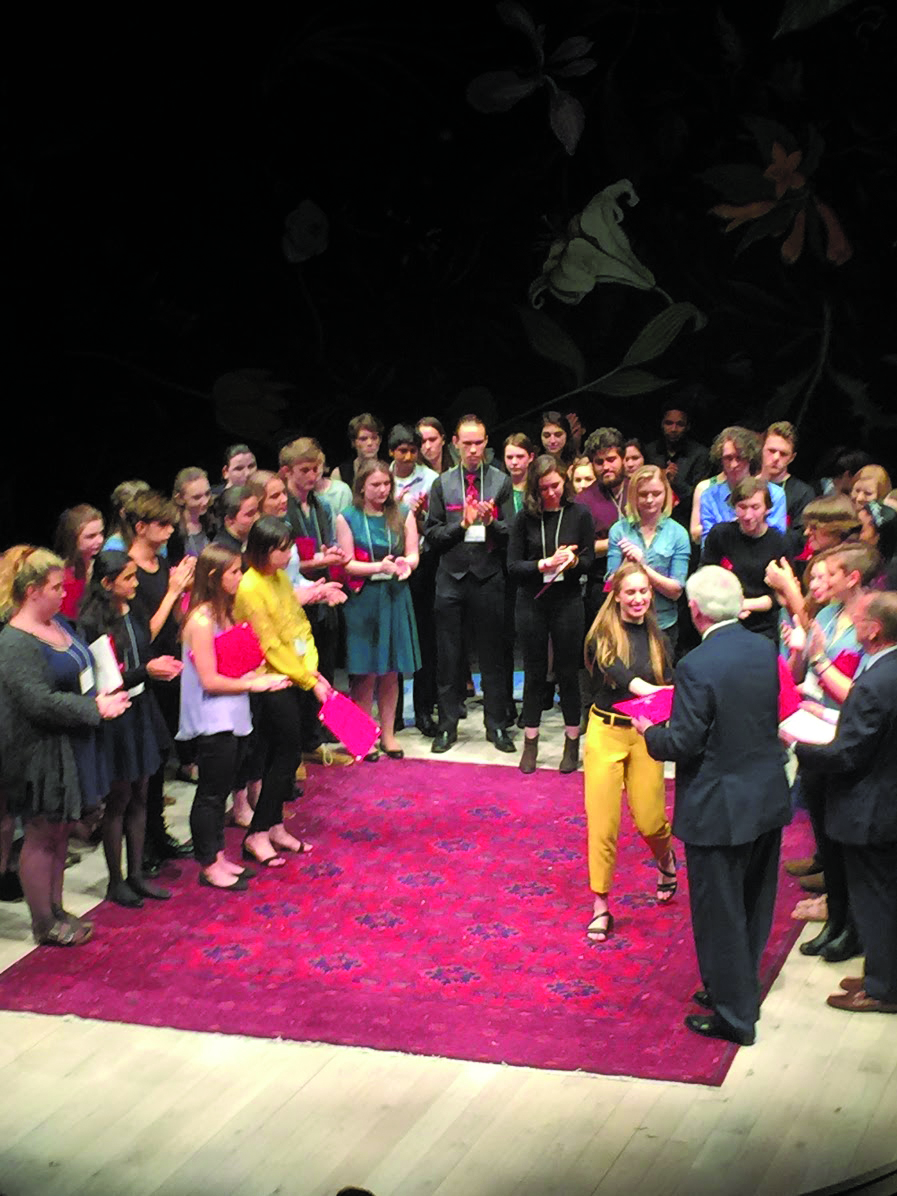 As William Shakespeare once wrote, “Some are born great, some achieve greatness, and some have greatness thrust upon them.” Santa Monica High School junior Judy Durkin achieved greatness on May 1 when she was named a Top 10 National 2017 Shakespeare Competition Finalist in New York City. 2017 marks the English-Speaking Union’s (ESU) 34th annual National Shakespeare Competition, with over 20,000 students participating at the local, regional, and national levels of the competition.

Durkin has loved Shakespeare since she was four years old, her passion first emerging when her father introduced her to “A Midsummer Night’s Dream,” ultimately taking her to a production of the play at the Will Geer Theatricum Botanicum in Topanga. She began acting in after-school theater at five years old, and later became a company member of the Will Geer Theatricum Botanicum, taking classes with various performers and performing herself.

“Having been immersed in Shakespeare, I remember feeling like Shakespeare wasn’t a foreign language at all,” Durkin said. “All of this would have been an absolute dream come true for my four-year-old self.”

Last year, Durkin and three other teenagers developed Worst First Kiss Productions, a production company focused on addressing socially-relevant topics from the youth perspective through acting. Durkin will be acting in and producing the play “Dog Sees God” at the Hollywood Fringe Festival this June.

Durkin has experience playing many roles, from the young Duke of York in “Richard III” to Juliet in “Romeo and Juliet” and First Fairy in “A Midsummer Night’s Dream.” This was her first year acting in the ESU’s Shakespeare Competition. With the help of Samohi English instructor and Samohi Shakespeare Society (SSS) club advisor Chon Lee, Durkin practiced reciting sonnets, monologues, and cold readings (a piece assigned to the student to perform) in preparation for her regional and national performances.

The competition, open to every high school in the U.S., begins with an in-school competition, in which each high school is able to send one winner to the semifinals of the regional branch. For Los Angeles, the semifinals were held at Marlborough School in Hancock Park, and consisted of 27 student competitors. Durkin emerged as one of the top performers from the semifinals, and advanced to the finals of Los Angeles, which was held at the Pasadena Shakespeare Club. Reciting Sonnet 106, a Viola monologue from “Twelfth Night,” and one of Volumnia’s monologues from “Coriolanus” (as a cold read), Durkin was crowned the winner of the Los Angeles finals, moving on to Lincoln Center in New York City.

This was the first time in Samohi history that a student advanced to New York City. Durkin expressed gratitude towards her high school after the competition.

“The most meaningful part of the experience was seeing and feeling the support that the Santa Monica High School community gave me throughout the entire journey,” Durkin said. “I am grateful for everything – from the surprise party that my school principal Dr. Shelton, house principal Dr. Medrano, and advisor Ms. Golden threw for me when I found out I was going to New York, to seeing the faces of Mr. Lee, Ms. Golden, and my family in the audience at Lincoln Center.”

Durkin was named one of the Top 10 Actors at Lincoln Center, and her performance was filmed and uploaded online by the ESU.

In addition to the surprise party thrown to celebrate Durkin’s achievements, Durkin received a book of Shakespearean sonnets and poems from Mr. Lee that had been signed by everyone at her school who supported her. Lee said he is continually impressed by Durkin’s acting skills, and that many judges were shocked to learn she is only a junior (as most of the student performers are seniors).

“I feel like her sense of character analysis is so strong that she’s not just able to understand the character on paper but she’s able to lift the words and make the audience connect with her laughter, her joy, her happiness, her pain, her sorrow,” Lee said. “Each time I hear Judy recite her sonnet or monologue, it’s organic and it’s different.”

Durkin, who is eligible to compete again next school year, said she hopes to continue acting for the rest of her life, especially in Shakespeare’s plays.