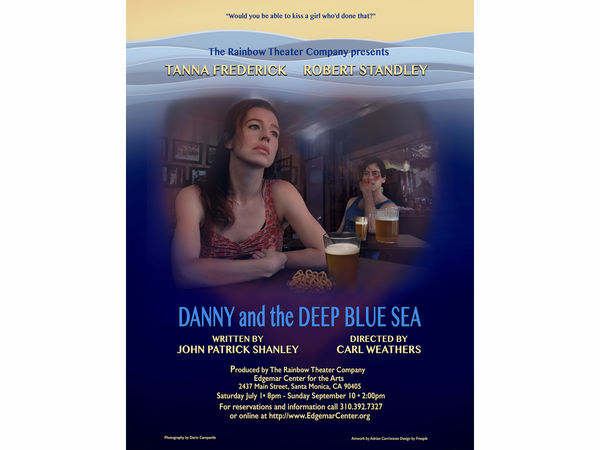 Danny and the Deep Blue Sea starring Tanna Frederick and Robert Standley, and directed by Carl Weathers, opened July 1 at the Edgemar Center for the Arts in Santa Monica.

Carl Weathers was famous first as an NFL player with the Oakland Raiders, then as an actor for his iconic movie roles (Apollo Creed, Action Jackson), and his roles as a regular on several TV series (Chicago Justice, Brothers, In the Heat of the Night, Street Justice), and as a television director (Always Night, For the People, Sheena, Strong Medicine, Silk Stalkings). He is set to direct John Patrick Shanley’s unlikely romance Danny and the Deep Blue Sea in The Rainbow Theatre Company production at Edgemar Center.

The setting is a rundown bar in the Bronx, where two of society’s rejects, Danny and Roberta, strike up a halting conversation over their beer. He is a brooding, self-loathing young man who resorts more to violence than reason; she is a divorced, guilt-ridden young woman whose troubled teenage son is now being cared for by her parents. Danny, whose fellow truck drivers call him “the animal”, seems incapable of tender emotion, while Roberta, who is still haunted by the memory of an ugly sexual incident involving her father, is distrustful of men in general. And yet, as their initial reserve begins to melt, and they decide to spend the night together, the possibility of a genuine and meaningful relationship begins to emerge—the first for both of them.

Tanna Frederick and Robert Standley are becoming the Hepburn and Tracy of local stages, having also appeared together previously in The Rainmaker (L.A. Times Critic’s Choice) and Jack & Jill. They also appear in the 2016 feature film Ovation. Ms. Frederick’s stage credits also include Always…But Not Forever, Sylvia, A Safe Place, Dutchman, and more. Known as a queen of indie films, her screen credits include Train to Zakopané, Just 45 Minutes From Broadway, Queen of the Lot, Irene in Time, The M Word, Hollywood Dreams and more.

Robert Standley won an Ovation Award for his performance in Barbarians and Outer Critics Circle Awards for his roles in A Streetcar Named Desire and Picnic. Other stage turns include Post Office (at the Kirk Douglas) and national tours of Cotton Patch Gospel, According to Coyote, and The Rainmaker. He’s familiar to televison audiences from stints on Invasion, Melrose Place, Breaking Through and All My Children.

A review for a production of Danny and the Deep Blue Sea said, “The play is the equivalent of sitting at ringside watching a prize fight that concludes in a loving embrace.’’- The New York Times.

Danny and the Deep Blue Sea was written by John Patrick Shanley. The author of forty-one plays, he won the Tony ® Award for Doubt, received a Tony nomination for Outside Mullingar, and won the Oscar® for his screenplay for Moonstruck. His other plays include the dreamer examines his pillow, Psycopathia Sexualis, Beggars in a House of Plenty, Italian American Reconciliation, Where’s My Money?, Four Dogs and a Bone, and many more. The play is being produced by The Rainbow Theatre Company.

The Edgemar Center for the Arts is located at 2437 Main St., Santa Monica, CA 90405. Parking is available in an adjacent lot (fee charged). There is also metered street parking and a nearby metered municipal lot.