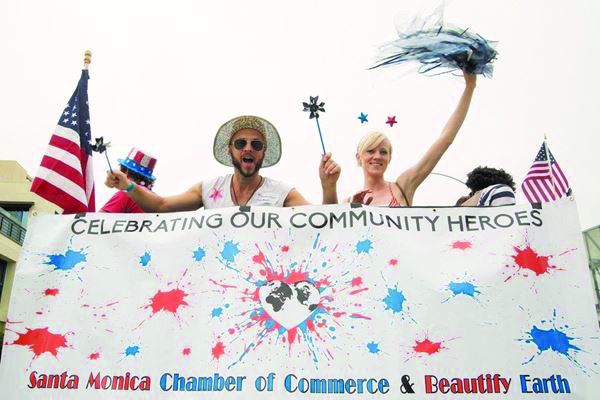 Ocean Park Association’s 11th Annual Santa Monica 4th of July Parade is being held Independence Day, Tuesday, July 4, and this year’s event is expected to be better than ever.

The parade, sponsored by the Ocean Park Association, begins at 9:30 a.m. at Santa Monica Civic Center. It will travel south down Main Street, turn right on Marine Street and end in the first beach parking lot on Barnard Way.

Jeff Jarow, co-founder and chairman of the parade, said the event’s homespun atmosphere keeps spectators coming back year after year.

“There’s some familiarity with the people,” he said. “You sit on the curb and see people you know. You see companies represented that are in Santa Monica, so it’s a very hometown feeling. It’s not the Rose Bowl, and it’s not the Macy’s Day Parade. It’s just hometown America on Mainstreet, U.S.A.”

Attendees are encouraged to wear red, white and blue. The parade grand marshal will be Elaine Polachek, Santa Monica’s assistant city manager, who is retiring in July after 28 years of service to the community.

Donna Gentry of the Gentry Group, a consulting firm coordinating the parade for the fourth year in a row, said the event brings people together.

“It’s all about community,” she said. “People come from all over the city to participate in the parade, to watch the parade, and everybody is celebrating the Fourth of July. It’s a really broad range of people who support and get into it, from all ages.”

Although parade participants vary each year, staples include the Boy Scouts, the Girl Scouts, church and temple groups, travel and tourism groups, as well as elementary and pre-schools. This year’s spectators can also expect rock, Dixieland, reggae and marching bands. About 50 volunteers help stage the parade.

Get to Main Street early, as street closure kick in before the event begins.

Here’s where to watch them.

The Bel-Air Bay Club will display fireworks just after sunset on Monday July 3, that will last for about 20 minutes. Access to the club is restricted to members and their guests; however, the fireworks should be visible from anywhere in the Pacific Palisades area, especially close to the club’s location on Pacific Coast Highway or within a mile of Will Rogers State Park.

On July 4, fireworks will be displayed from Palisades Charter High School as part of the ninth Palisades Rocks the Fourth concert. Food trucks and stage performances in the high school’s parking lot begin at 4 p.m., with the mainstage show at 6 p.m. and fireworks at 9 p.m. The event concludes at 10 p.m.

Marina del Rey will begin July 4 fireworks at 9 p.m. for about 20 minutes, with prime viewing at Fisherman’s Village and Burton Chase Park. Major road closures for the event begin at 6 p.m., so organizers advise arriving early with parking and transportation planned ahead of time. A full list of road closures can be found on Marina del Rey’s website: visitmarinadelrey.com