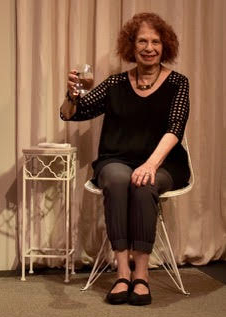 Korzen, whom the Huffington Post describes as the “Get a Laugh on One Line Specialist,” is best known for playing Doris Klumpus on Seinfeld.  Throughout the summer, she has been delighting audiences with her intimate, hilarious and poignant stories of her life as a perennial bit player, an exasperated daughter and an agitated mother.

Audience members leave the theatre filled with enthusiasm, saying “Many, many kudos to Annie who gave us so many laughs and who touched my heartstrings,” and “I could have listened to Annie all night!” Comedienne Monica Piper, fresh from her Off-Broadway stint, says,”Go see this hilarious and touching show.  You’ll be glad you did.”

Originally scheduled to conclude its run in early August, the show has been extended to accommodate audience demand. An additional nine shows are scheduled until September 9.

Annie’s fans include Sex and the City executive producer Cindy Chupak who says, “I love every story Annie tells – she will make you laugh, cry and nod in recognition. Between laughs she is able to capture gorgeous, surprising, life-affirming truths.”  Annabelle Gurwitch, New York Times best-selling author adds, “Annie’s late-in-life success story keeps us in stitches and occasionally brings us to tears.” And Transparent creator Jill Soloway calls Annie, “Hilarious, brilliant and a true inspiration.”

Annie Korzen Famous Actress will continue its limited run on Thursday and Saturday evenings and in Sunday matinees from Thursday, July 20 to Saturday, September 9.  The full schedule is available online. Advance-sale tickets are $40 and may be obtained at www.jewishwomenstheatre.org.

JWT stages and displays traditional and contemporary works that provide a forum for the development, performance and showcasing of Jewish talent. Now in its tenth year, its “salon theatre” of original dramatic shows, each written to a specific theme, displays the diverse and eclectic community of writers, artists and creators who comprise L.A.’s Jewish women’s community.  Performances take place both at its new home in The Braid Performance and Arts Space in the Santa Monica’s Bergamot Arts District, in homes throughout the city, and on tour in California and throughout the nation.