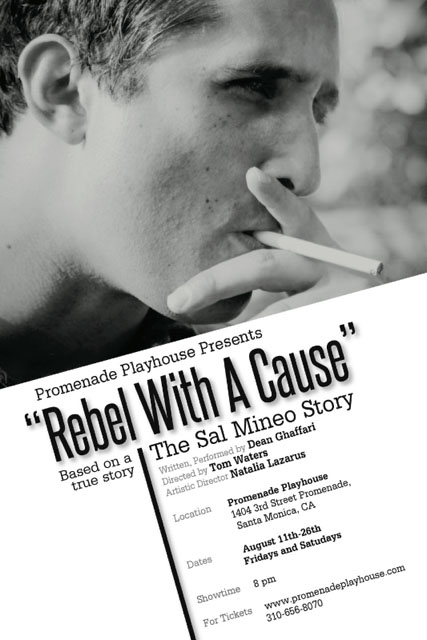 Natalia Lazarus and The Promenade Playhouse are proud to present “Rebel With a Cause – the Sal Mineo Story” – Based on real events.  Written and performed by Dean Ghaffari and adapted for the Promenade Playhouse. The Los Angeles Premiere will be directed by Tom Waters and will open August 11th at The Promenade Playhouse, located at 1404 3rd Street Promenade, Santa Monica, CA. 90401, with performances on Friday and Saturday @ 8:00PM.
Tickets on sale at:  www.promenadeplayhouse.com

Dean Ghaffari brings to life Sal Mineo and a host of characters instrumental in his journey in this
energetic, historical backstage view of one of America’s greatest actors and first Gay Icons.

The Promenade Playhouse hosts the Los Angeles premiere of Dean Ghaffari’s one-man show “Rebel With a Cause: The Sal Mineo Story”, before it heads to New York in September.

Sal Mineo was a two-time Oscar nominated actor, Golden Globe winner and a gold record-selling pop singer. He is best remembered for his portrayal of “Plato” alongside James Dean in the Classic “Rebel Without a Cause”. A role he was Oscar nominated for (at that time, he was the youngest actor ever nominated).

Ahead of the times, Sal Mineo truly was a “Rebel With a Cause”. He was a prominent figure for gay rights before he was tragically murdered. Some say his murder was directly related to his gay activism. Or perhaps a spurned lover, no one will ever really know.

After living the high life of luxury with mansions, butlers, maids and fast cars as well as providing an extravagant lifestyle for his parents, Sal Mineo died with only $20 in his pocket.