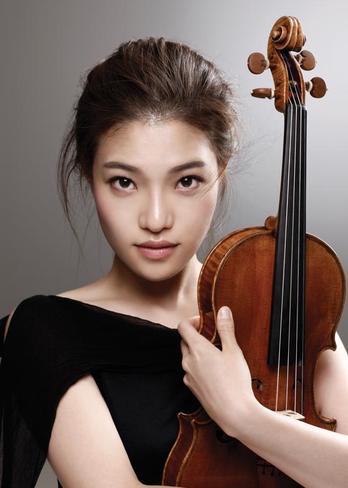 Violinist Ye-Eun Choi has won acclaim by the international press for her colorful, expressive playing, her lyricism and impressive virtuosity. She brings all that skill and more to the Dream Orchestra concert “Dreams of Tchaikovsky” on Sept. 16.

World-renowned violinist Anne-Sophie Mutter brought attention to the exceptional talent and maturity of the South Korean violinist by making her a member of her foundation at the age of only 16 in 2005.Choi’s 2009 successful debut with New York Philharmonic led to her an international career.

“She is a musician who looks to express herself in her own individual way; who has a distinguished, recognizable sound and commands an excellent, instinctive feel for the music,” In Mutter said in an interview. “This is precisely what is naturally required from a soloist: someone who does not just perform a piece, but makes it her own. She ranks among the most talented of violinists.”

Choi continues to work closely with Mutter by performing on tour this year with Mutter’s Virtuosi. Other highlights of Choi’s 2016-17 performance season include tours with the NDR Radio Philharmonic Orchestra Hannover to South Korea under Andrew Manze and with the Rotterdam Philharmonic in the Netherlands and Italy with Yannick Nézet-Séguin. She debuts with the Bamberg Symphony under Christoph Eschenbach and with the Philharmonic Orchestra of Trier in Germany. Choi is invited to perform at the anniversary concert of the Verbier Festival at Schloss Elmau.

In 2007, she was selected as “Rising Star” by the League of American Orchestras. In 2013, she was recipient of the “Young Artist” European Cultural Award.”

Choi’s debut CD was released in 2013 by Deutsche Grammophon with sonatas by Mendelssohn, Schubert and Prokofiev.

The Dream Orchestra and Artistic Director Daniel Suk have been presenting world-class programs at the Broad Stage in Santa Monica and Zipper Hall in Los Angeles for past two years. Suk has presented concerts spotlighting master works of great composers with each concert focused on one composer rather than putting many unrelated works together.

“These are very serious concerts,” Suk said. “For those who are real classical music fans, our concerts are truly ‘Dream concerts.’”