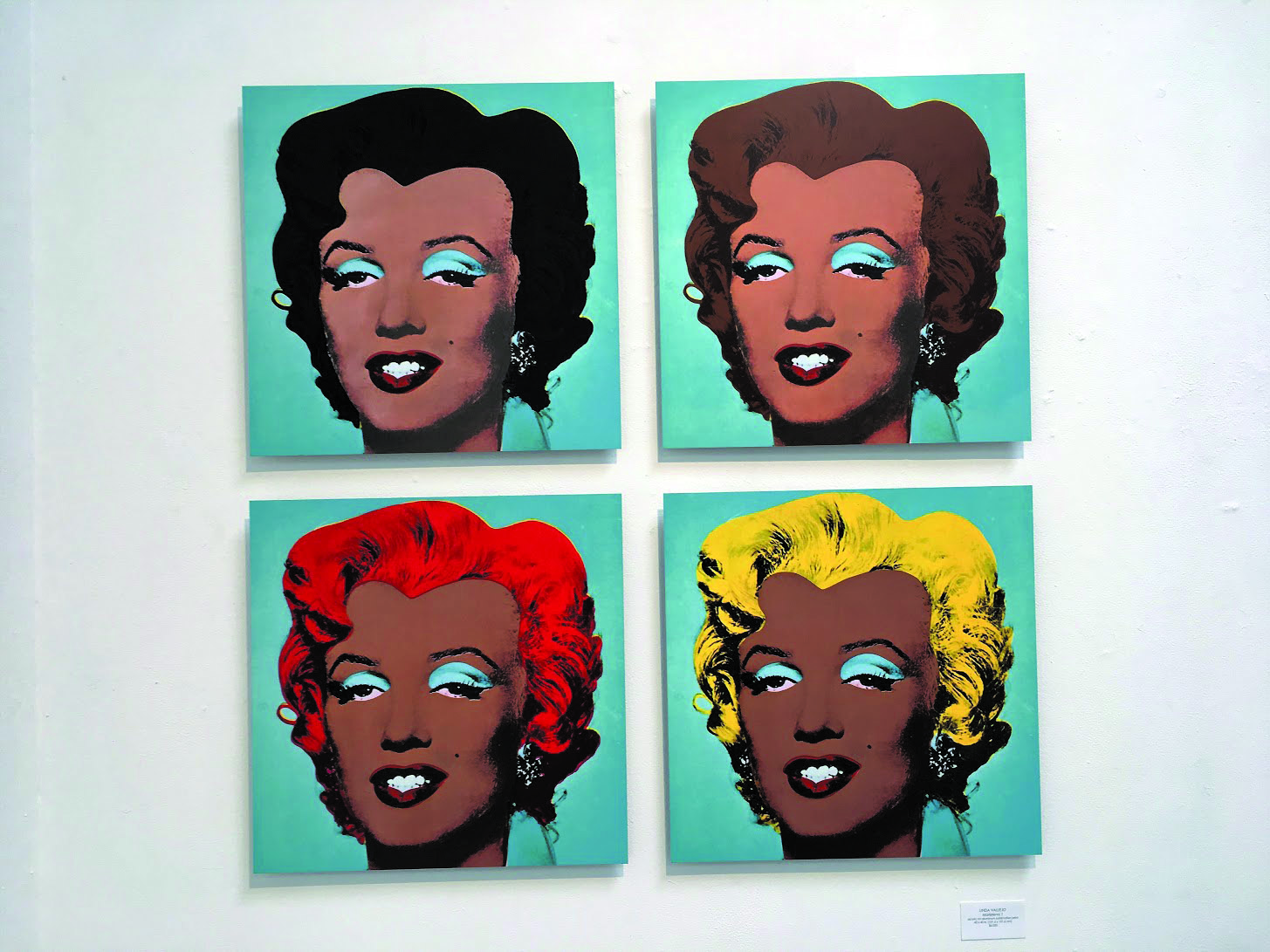 Saturday, September 9 saw many galleries within the Bergamot Station Arts Complex hold opening receptions for new exhibits. Everyone was invited and Bergamot Station hosted live music and food vendors within the complex grounds. Additionally, a number of the exhibits were participants in the Getty Foundation’s “Pacific Standard Time: LA/LA” Initiative, which showcases art by Latin American and Latinx artists in more than 70 galleries throughout Southern California.

bG Gallery, located in unit G8a, began showing a new exhibit titled “Keeping It Brown,” featuring the works of Linda Vallejo. The gallery’s Head of Collection Consultation Mark Mcalinden explained that she’s been shown in the gallery before, but never in a solo show.

“She’s been in Getty Standard time shows before,” McAlinden said. “She’s actually in about six or seven shows around L.A.”

Her pieces on display were from three projects: “Make ‘em All Mexican,” “Brown Oscars,” and “Brown Dot Project.” The first two included representations, both in painting and sculpture, of historical, pop cultural, and Oscar-winning figures painted to look of Latinx heritage. The “Brown Dot Project” takes data on Latinx populations and workforce and transforms them into art by creatively arranging the dots representing the data.

The Peter Fetterman Gallery, located in Unit A1, was another participating in the Pacific Standard Time initiative.

“We were invite by the Getty based on our artist representation of Sebastião Salgado,” explained Gallery Director Michael Hulett.

Salgado is an award-winning photographer who was born in Brazil, and is now based out of Paris. He has been a UNICEF Goodwill Ambassador for 16 years.

Also as part of the Pacific Standard Time project, the Lois Lambert Gallery, located in Unit E3, presented an exhibit titled “I Come From Everywhere and Everywhere I Go/ Yo Vengo De Todas Partes y Hacia Todas Partes Voy,” which is a line taken from a poem by Cuban poet José Martí, and featured works of six Cuban artists.

“It really encapsulates the idea of a global person,” said Maria Guerrero, the gallery’s Assistant Director, about the title of the group show. “That’s one of the themes we wanted to highlight.”

Guerrero explained that the gallery has exhibited Cuban artists for the past three years, and the Pacific Standard Time project ended up offering them another opportunity to curate a new Cuban art show.

The featured artists included Eduardo Rubén, whose works depict monuments or buildings under development, which takes a notoriously long time in Cuba, due to government bureaucracy. Those represented by Rubén have been forgotten, and have no remaining placard or sign explaining their original intended use. Guerrero explained that his works are in black & white, as an homage to black & white photography. Additionally, Alexander Calder, one of his influences, is referenced in the title of one of his works—”Calderón”—which is a common Spanish surname. Guerrero explained that Cuban artist often reference works of American artist in this fashion.

Darwin Estacio Martinez was another artist on display, whose works also reference American art as well as 50s advertising, and depict faceless bodies in formalwear, which Guerrero explained often gives those viewing his art the impression his subjects are in positions of authority.

Artist Luis Rodriguez NOA’s works are busy with small details, with references that include last year’s Hurricane Matthew, which hit his family’s home of Baracoa last year, and in one work, Martí himself, the poet from whose work the gallery was given its title. The people in his paintings are shown in refurbished vintage American cars which is common in Cuba, and in one example in one of his paintings, using a hose connected to a water tank on the roof of an apartment building to siphon water into an individual apartment.

“They have to innovate and invent different ways of doing things all the time,” said Guerrero, explaining how Cuba being cut off from the U.S., which would be its closest trade neighbor, is a unique island culture due to this necessity of innovation.

Other artists include Alejandro Gómez Cangas, exhibited at the gallery for the first time, who paints large crowds of people, each given individualized detail, taken from composites of many different photographs he takes, in order to represent both the ideas of crowds, and the individuality each person retains in a crowd; Adislen Reyes Pino, whose minimalist works are taken from three projects, all of which depict her alongside a dog that represents art, with each project representing a different sort of lens into her art; and Maykel Linares, whose intutiive works all include distortions, like in one example, a representation of a real-life train station he painted from memory.