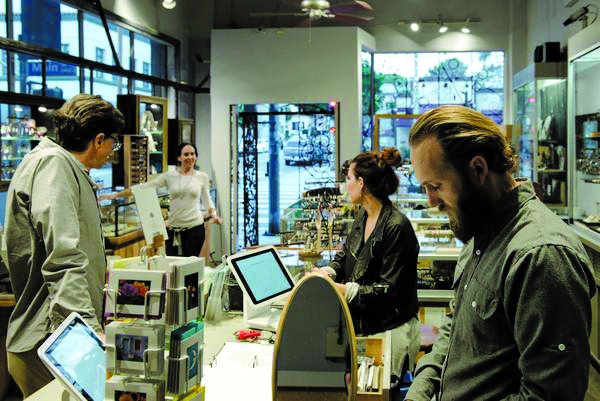 As stores up and down Main Street, Santa Monica, shutter due to increase rents and reduced revenues, one gem continues to impress their loyal clientele and new customers alike.

Accents Jewelry opened in 1987 and their hands-on approach and personal service is standing the test of time.

Owner Steve Hanna explained to The Mirror that his idealistic values have helped his business thrive for 30 years.

“For example our staff is recruited out of our ongoing weekly jewelry workshop (since 1991), who eventually become designers and eventually go on to their own successful businesses,” Hanna said. “The loyal support from the community for 30 years has been very fulfilling. I’ve had the opportunity to make custom wedding rings for couples those siblings grow up before your eyes and become loyal customers and friends as they turn into young adults.”

Hanna started his own business in 1973 with miniature sculptures to wear, taking in special orders for rings, doing craft shows, and eventually wholesaling to boutiques and department stores across the country through sales reps.

Moving into retail, he took business classes and eventually opened a shop on Main Street near the Venice border in 1987.

“My target market was middle-income people who lived in the area near where I had lived since I was a teenager,” Hanna said. “The unique handmade jewelry drew people in, the personal services offered and the affordable prices kept them coming back, and the mixed tapes made them want to hang out.”

Hanna moved Accents to its current location on the corner of Main and Ashland in 1993, often heading downtown or to his workers’ studios before opening the store in the morning.

“I was so passionate about bringing together my concept of offering the latest in handmade jewelry at fair prices and while establishing relationships with each one of them by taking care of all their jewelry needs,” Hanna explained.

“My dream has come true,” Hanna explained. “Accents supports six of us jewelry designers, with a lot of training help from my supervising manager and gem expert Johanna Torell, we instill in each of them the importance of the personal service and sense of community that we are known for.”

For more information head to Accents Jewelry at 2900 Main Street Santa Monica or check out: accentsjewelry.com.