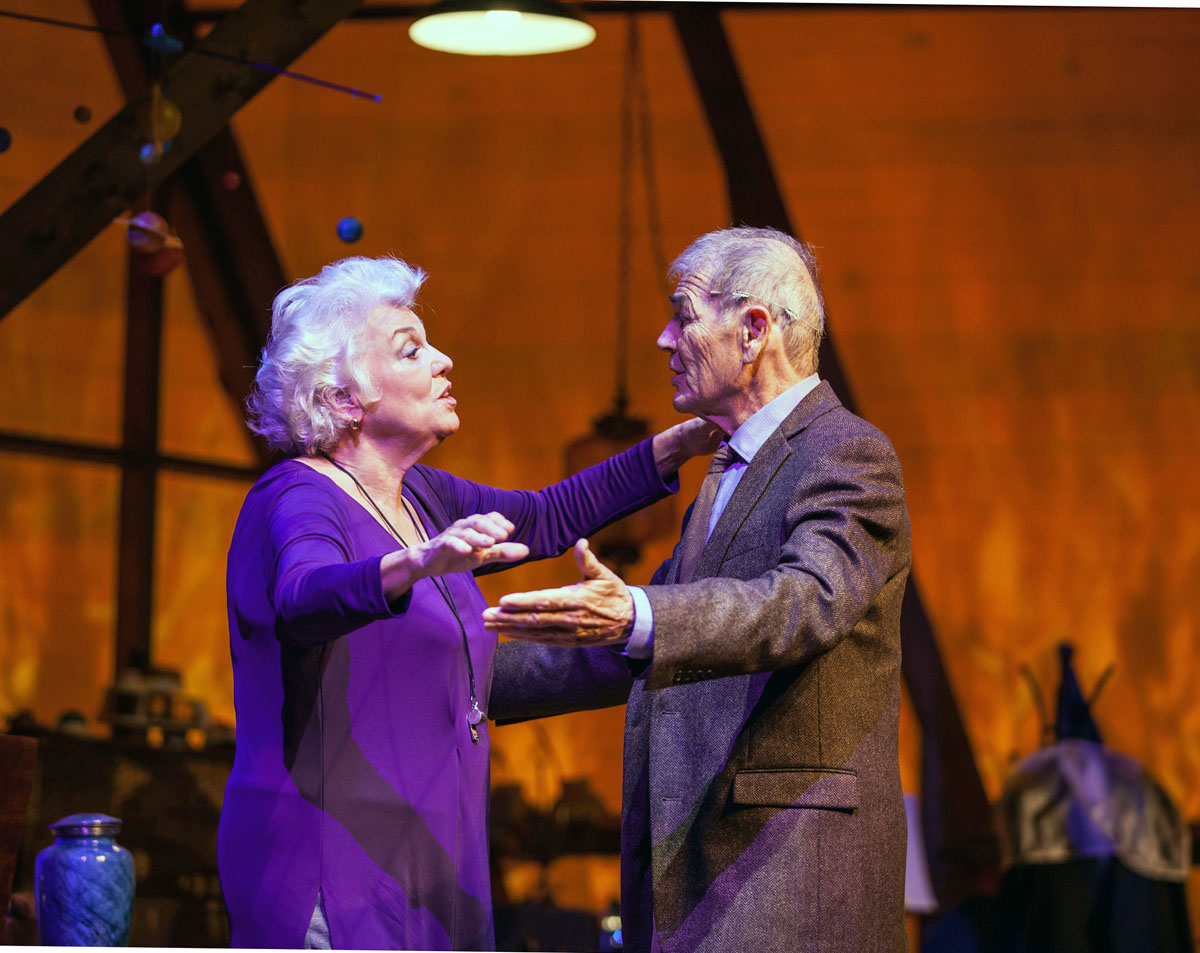 I might as well get it said from the top. “Chasing Mem’ries,” written and directed by Josh Ravetch, is an unbearable schmaltzy, overly sentimental, soppy play. Billed as “A Different Kind of Musical,” that is an apt sub-heading as this is definitely not a musical, but a dramedy with music and only the compelling performance by Tyne Daly, the grieving widow Victoria, will keep you from snickering at the hackneyed dialogue unfolding on the Geffen stage.

The action takes place in Victoria’s crammed attic, which is filled with mementos reflecting the family history some of which include books written by her recently deceased professor husband Franklin, well played by Robert Forster. Other relics accumulated throughout their 57-year marriage include a high chair, a three-wheel bike, a two-wheel bike, tennis rackets, and family albums which Victoria rummages through and sings an occasional song with Alan and Marilyn Bergman’s eminently forgettable lyrics, but interesting music by Bill Cantos & Mari Falcone, Dave Grusin, Marvin Hamlisch, Michel Legrand, and Johnny Mandel.

Victoria’s son Mason, beautifully brought to life by Scott Kradolfer, repeatedly tries to get his mother to join the around 300 guests assembled on the lawn of their home for Franklin’s memorial service. Victoria has decided not to join the guests and continues to hide out in the attic, where the action begins and ends. Mason tries over and over again to convince his mother to join their guests, some of whom she doesn’t like. She seems to have a particular dislike for a guest named Thelma who apparently showed up at the memorial wearing pumps generally referred to as an invitation to perform a sex act on oneself and sporting a tiara. Although we never actually see Thelma, we conger up a vision of someone dressed to go night clubbing rather than attending a memorial service. The other thing we learn about this unseen character is that she doesn’t have a pleasant singing voice and Victoria absolutely does not want her to sing Alan & Marilyn Bergman’s iconic “The Way We Were.” To engage in conversation, Victoria asks Mason, who is an astronomer, about his fiancé, who is an astronaut, and was recently launched into outer space. She sent him a note from the great beyond that she is breaking up with him because he was at a conference and missed the blast off. What decent boyfriend misses his fiancé’s journey into space? The conversation then segues into Mason confessing that since his childhood was so perfect, and his parents so perfectly happy, he didn’t know how to cope with any problems that might come up in relationships that were less than perfect. What Mason doesn’t know is that his mom is having an ongoing dialogue with his deceased father who constantly appears and disappears, but not really because there he stands as big as life. (Perhaps some “mood” lighting might have rendered those scenes more believable?) Much like Noel Coward’s “Blithe Spirit” the only one who can see the “invisible” ghost is Victoria and when Mason reappears to once again try to convince his mother to leave the attic, Franklin moves upstage to be somewhat out of the picture. Victoria and her dead husband dance and reminisce about their idyllic life together with Victoria declaring that she simply cannot go on without him. In a “win one for the Gipper” moment, Franklin convinces Victoria that she must go one with her life and after shouting amusing instructions through the attic window to the gathered friends below, Victoria musters up her courage and walks down the stairs to face the crowd. The end.

There’s not much to say about the technical elements of the production other than if the script and lyrics matched Tony Fanning’s excellent scenic design, this could have turned out to be a really compelling evening of theatre. But then again, to see Tyne Daly reveal the grief and heartbreak of losing a loved one is worth the price of admission.